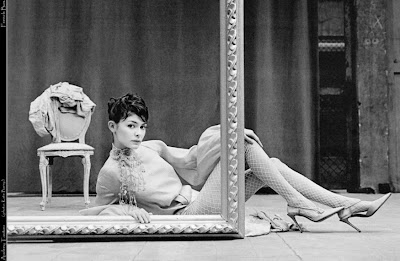 You'd think that watching three French films in three days would have whetted my appetite, instead, it's increased it voraciously. I'm now utterly besotted after this weekend's festival and am feeling all pouty at the lack of French films in my immediate future {at least the pouting will give me a certain French style non?}
Normally I'm quite on-edge and cranky when I see a film. I loathe those who chatter through the opening credits knowing how much effort the director's put into setting the scene with the opening moments {and for those who actually dare to speak during a film, hmmmphf}. But the crowd at the film festival was just as you'd expect. Older than usual, and younger too. Refined, elegant, with some amazing fashion choices. One woman with a gorgeous steely grey bob had a pair of garnet-framed glasses that were just stunning in their combination. Her friend was dressed predominantly in black, but with a fabulous pair of red suede boots that made the edges of my smile creep skyward. Despite having never attended a film solo I went to all three on my own, and while the first night was odd - by the end I was addicted.
What a weekend. It's made dealing with a sick-at-home child much more bearable.
Posted by PinkPatentMaryJanes at 4:48 PM