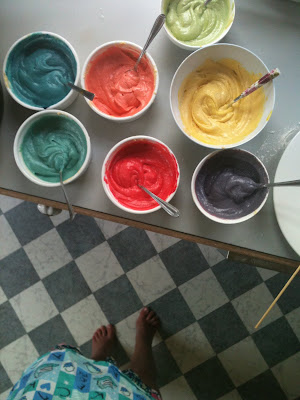 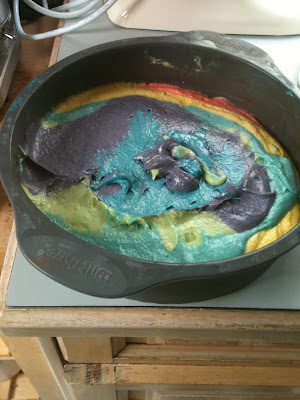 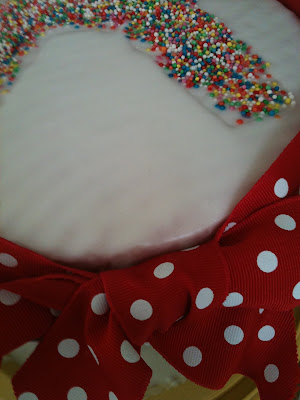 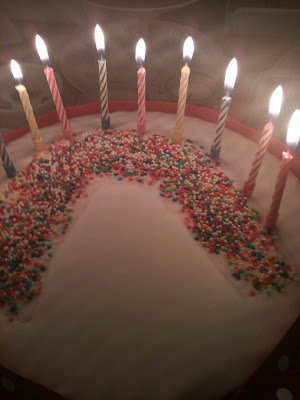 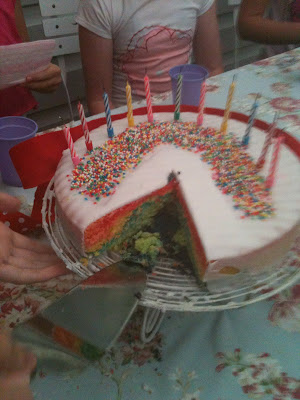 If there's a birthday cake guaranteed to bring out the ooohs, the aaahs and the 'awesome' it's this. Our rainbow cake with white royal icing {and a hundreds and thousands 'rainbow' on top} was a smashing success. I found the recipe over at not quite nigella and I must send her a big thank you. It was a simple butter cake coloured with gel icing {very important - these are vivid colour yet don't affect the taste or texture of the batter}.
The cake topped off a wildly successful party. The girls had fun making rainbow bracelets with the different coloured strings I'd bought {beads, not so sucessful, some of the holes too teeny to thread}. Then there was a riotous game of Celebrity Heads {my husband's inclusion of the school principal was inspired - hilarious}. Then the food. The sushi platter I'd ordered in was swooped on. The honey chicken wings gobbled up, as were the pizza and the pesto pinwheels. The surprise love was the olive oil and balsamic dipping bowl I'd put out with the baguettes - obviously a lot of restaurant-savvy kids as it needed constant topping up.
Then there was a spot of dusk swimming, despite the weather. And some beautiful, thoughtful presents.
My kitchen may still need mopping of some multi-coloured icing messes, but it was ever-so-worth it. Now, bring on Christmas shall we?
Posted by PinkPatentMaryJanes at 8:21 AM