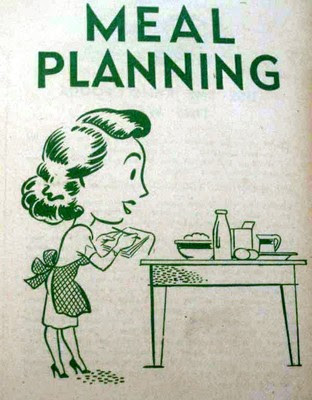 I've been meal planning pretty consistently for a while now and people have asked me a few questions about it which I thought I'd share. So settle yourself and have a read:

First tip: stay simple
Meal planning isn't about creating exotic meals, or meals you've always wanted to try. It's not a time to drag out your cookbooks and try to make something new and different. When you start stay simple: pasta, mexican, pizza, roast - stick with what works for your family and you'll have success.

Second tip: get out your diary
You'll notice in my meal plans I write what we've got planned, such as late night ballet, or netball training. You have to consider this. If you think, "Oh, it's okay, I'll get home at 6pm and still have time to whip up a paella" think again. On busy days plan quick meals, or slow cooker meals. Plan to succeed.

Third tip: be flexible
I'd say that our meal-plans stick to the days I've intended maybe around 80 to 90 per cent of the time on a good week. On a bad week it's more like 50 per cent. Success can be attributed to making sure I've shopped and have all the ingredients ready to go - and enthusiasm. You need to have a couple of lazy meal options ready to go for those days when you're over it all and just want to put something on the table.

Fourth tip: double up where possible
I love meals that offer up double the fun - a roast chicken that can be used in a chicken soup the next night, or leg of lamb that becomes shephard's pie.

Fifth tip: involve the kids
My daughter's become a far more adventurous eater since we've meal-planned. She knows that's what we're having, and she likes being able to have a say as well. Kids are far more likely to eat a meal they've had a say in.

Sixth tip: write it down
The best way to ensure a balance in your meals is to have it all written down in front of you. I try for a range of proteins and vegies in our meals - colours and textures. Jotting it down makes it easy to see you've already got a chicken meal planned, so you can swap with a pork number.

Seventh tip: persist
I didn't succeed the first time time I tried meal planning, or the second, good grief, it's probably more like 10th time lucky. But I'll tell you this, it makes my life soooooooooo much easier. I don't have that awful, "Oh lordy, what's for dinner?" thought at 3pm. We don't fall back on takeaway too often. I save money - and we eat pretty well really.

Ready to give it a shot? Go on, I know it's all grown-up and anally-retentive - but it really does make life a lot more simpler. And don't we all want that?
Posted by PinkPatentMaryJanes at 9:04 PM