tedxnewy: ideas worth acting on 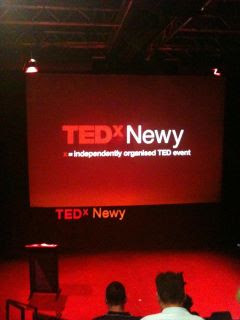 On Saturday morning hubby dropped me off at the Civic Playhouse and I made my way to registration for TEDxNewy. There honestly was an excited buzz in the air, with genuine smiles being offered from the TAFE volunteers, to all the lucky audience members. Only 200 people were selected to buy tickets, and I was so lucky to be one of them.

As I worked my way around the foyer I spotted a friendly face, well, a friendly face that I recognised from an avatar on Twitter that is. The NewyTweeps were out in force at TEDxNewy and they were all as marvelous as they appear in 140 characters. I can now say that I've met some new friends I'll have for life.

So @drdrdr09 and I made our way to one of the rear two rows - the tweeting rows, along with @thegreenegg and settled into our seats - tweeting thumbs at the ready. The screen lit up, and so did our faces, it was here.

Speaker after speaker blew my mind. From the opening of Bernie Curran, followed by the awesome Marcus Westbury and my new crush, Gerry Bobsien - there was so much to take on board. Frantically watching, tweeting, reading other tweets and digesting, TEDxNewy was full of ideas and inspirational {sorry, this word's going to come up a lot} people who have a little idea and act on it - with great results.

I'm planning on writing posts on each of the speakers from the day, but before I do, I thought I'd share how I'm going to use my TEDxNewy experience. Each of the 16 speakers were punctuated with short films or pieces that enhanced the experienced even further - so what I'm going to do is take something from each - every day - and do my TEDxNewy: ideas worth acting on.

Yesterday, inspired by The Naked Runners I threw on my old trainers {my feet are too delicate for the barefoot running they also advocate} and took off. I'm nowhere near fit enough just to start running, but I went to the beach and walked briskly, and nakedly. No iPod to distract me, no fancy running clothes, no GPS - just me, my feet and the beach. I smiled at others, checked out the new SurfHouse at Merewether and then, when I got to Dixon Park - ran up the hill like a toddler - just for the fun of it.

Yesterday I knocked over two goals: I also followed the Take3 ethos. The theory described by Tim Silverwood is that every time you go to a beach, a waterway - or anywhere really - take three pieces of rubbish with you. Plastic is deadly for our wildlife, so every little bit counts {I kinda cheated and took 4...} This is one I'll be acting on daily. I've always picked up rubbish whenever I see it - but I love the idea of giving it a name. It's so simple, just take three things.

Guess how good I felt afterwards?

I'm planning on acting on every single speaker - in some small way. I'll let you know how I get on.
Posted by PinkPatentMaryJanes at 8:55 AM