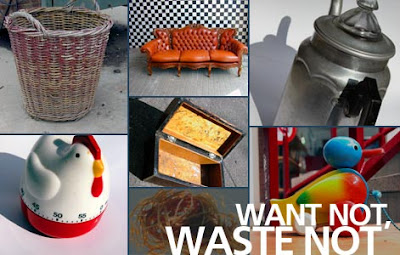 I am a big fan of Freecycle. We joined a few years ago when a charity rejected a two year old mattress with a coffee stain on it {not whinging, that's their policy - but I didn't want to waste it}. Over the years we've rehoused our old trampolene, old bikes, a lounge - loads of stuff. It gives me the happies seeing things not going to landfill but going to a home where people genuinely want and need an object and would prefer to reuse rather than buy new.

The other day we were tidying away and I found my husband's old bike seat. Almost brand new, he just needed something snazzier for the 100k rides he does. Then, not two days later a call comes across Freecycle asking if anyone had a spare bike seat. Bingo. We have a match.

It's surprising seeing what some people put on there - and what people take. We had a stack of old photo library books that I kept forgetting to take to my daughter's school - but I knew they'd be great for some kind of scrapbooking. Sure enough a counseller who works in welfare was so grateful for them as she'd ask clients to create memory books as therapy.

Everything's got a use somewhere doesn't it?
Posted by PinkPatentMaryJanes at 5:11 PM

Email ThisBlogThis!Share to TwitterShare to FacebookShare to Pinterest
Labels: image from: http://relocalisehepburn.blogspot.com.au/p/freecycle.html