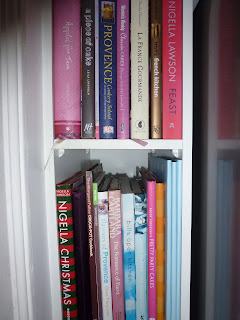 While my parents were up my step dad moved some shelves in the butler's pantry to fit in our new fridge. See, it fitted, but because it's a double door number the doors wouldn't completely open. This meant he had to narrow the shelves in the pantry on the wall closest to the kitchen.

At first I though they were an almost unusable width, until I came up with this idea! I now have four shelves filled with some of my cookbook collection. Genius. And the shelves on the other side are just the perfect width for cereals, bread, crackers, condiments and tinned food. Win all around.

I'm also in love with the water filter and ice maker in the door. I didn't want one of them, but it seemed that all the fridges of the size we wanted had one. And now, oh I love it. My mum and step-dad also fell a bit in love with it while they were up and I wouldn't be at all surprised if something similar makes it into their new kitchen when it's finished.

So, tonight I have a lamb shoulder slowly roasting in the oven. A friend on twitter told me about a greek recipe involving copious amounts of olive oil, garlic, lemon and olive oil and I thought I'd best try it. It's baking for four hours on a low heat so should be yum. I'll serve it with lemon roasted potatoes and a green salad with persian feta. Hello.
Posted by PinkPatentMaryJanes at 4:18 PM