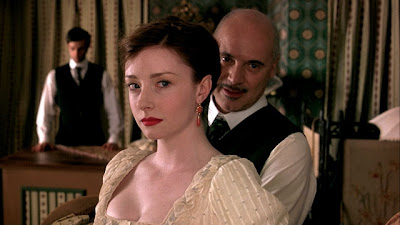 Tonight a movie-loving friend and I went along to a preview screening of The Duel at The Tower Cinemas. This filmic adaptation was visually rather sumptuous, every frame of every shot was a visual delight. The colours were stunning, and the costuming positively sigh-worthy. Filmed on the stunning Croatian coast on the Black Sea and set in the 1890s, this film resembles a series of moving stills bringing to life one of Seurat's masterpieces. The stunning beach, with its glorious beach house, had me planning my next european trip with a side trip to this gorgeous place.

My knowledge of Chekhov dates back some time. But if memory serves this adaptation is classically correct - perhaps too much so as the era's strict social mores versus the characters' louche morality is near incomprehensible to a modern viewer. Sub-plot points seemed to veer off in many directions: some seeming without a point. There were more meaningful, moody glances than an episode of Bold and the Beautiful, and quite a few off-kilter moments that had me whispering to my viewing companion "Who? What? Why?" 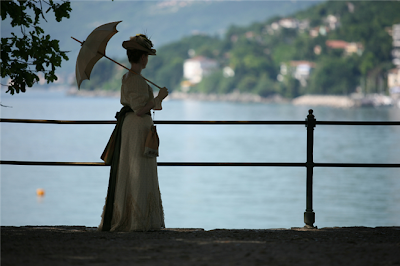 The premise of the plot was interesting, if the pace was a little too limpid for my liking. As a visual feast it gets the tick of approval, but if you need a film where you can empathise, sympathise or at least like a character, this mayn't be your cup of tea. Rarely have I seen a cast so unsympathetic.

That said, I did covet the leading lady's lipstick, red shoes, hair and much of her wardrobe. Her paramour? Not so much - he had me calling for the duel, in the hope that we'd see his demise. Sure, we were meant to believe that he was driven to the brink of madness by heat, boredom and alcohol - but I think he was just an ass.

I do love how The Towers is bringing such a diverse range of films to an audience and taking a chance on art house films. Sure, not every film is your perfect match, but there's always something you can take away from them - which you can't say about your typical mainstream blockbuster.
Posted by PinkPatentMaryJanes at 10:38 PM