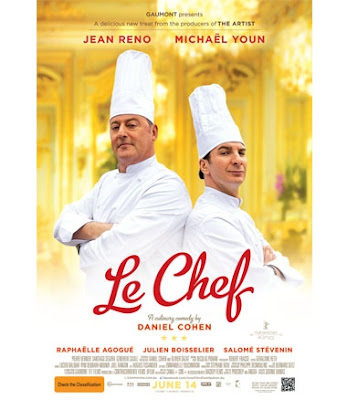 I saw the sweetest movie last night. That's the poster above - looks very french non? I went in hopeful that I'd like it - after all, it was French and about food - and oh, it was such a delight. Funny, a really great plot, sweet and inspirational.

It's the story of two chefs: one is a three Michelen Star celebrity chef, {or trois etoille if you say it in French, which you should because it sounds heaps better} who's under pressure - lose a star, lose the restaurant. He's worried he's lost his touch. He needs inspiration, fast. Could he find it in the other chef?

I shan't give away any more of the plot, but it's an absolute delight. And there's enough shots of Paris to sate my appetite too. The performances are sublime, Jean Reno is fabulous as always, and I've a new fave in Michael Youn. Don't get me started on how absolutely gorgeous the women were in this film - le sigh...

I saw this at a special Films for Foodies night at The Tower Cinemas. Such an innovative idea. Upon arrival you're greeted with a glass of wine and a bag filled with food-goodies. Then former MasterChef contestant Peter Vickery came in and was really quite sweet chatting about the passion he's discovered for gardening and getting back to basics with his cooking. A rather fabulous sommelier then shared a few wine tips and then the movie began. Apparently they're hoping to introduce cooking demos at future screenings - how cool is that?

I'll be back for the next one - gotta support innovation like this don't you think?

PS: after writing this I tuned into David and Margaret At The Movies to find they were reviewing this film. Well, they said they were reviewing this film, but it appears they saw something else. They saw something unfunny that they hated. Me, my friends and every other person in the cinema who was laughing uproariously would disagree. Ignore them, it's funny and sweet.
Posted by PinkPatentMaryJanes at 7:47 PM