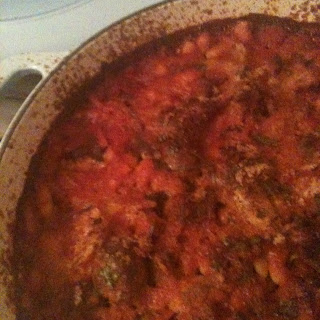 Well hello, here we go, off on another round of meal planning to get through the week. It's well and truly wintery here, so the meal plan's going to reflect that. Ready? Let's go.

Monday: I called for husband and daughter's input on meals this week. Before I'd even finished my sentence my husband said "Cassoulet" seconded by my gal. So cassoulet it is. What a nice way to finish a long weekend. Mine's the quick version, not Anthony Bourdain's three day number. But it's tasty. Here's the recipe.

Tuesday: I'm terrible at using frozen meat. I'll throw it in the freezer the day before its due date and then wonder what I can do with it. I have some chicken mince I bought at a two-for-one special, so I need to use it. I'll defrost it in the morning and then make a dish with it tonight. I'll follow something I saw Jamie Oliver make once. I'll cook up some noodles in boiling salted water and while this is happening I'll sauté the chicken mince in a dry pan until it's super-brown and caramelised. Then I'll add some garlic, red chilli, finely diced onion and some fresh thai basil (I'm growing it and have loads! But normal basil would work just as well). Then I'll squeeze over lots of lemon juice. I'll drain the pasta, saving a little water to create a sauce. I'll add the pasta to the chicken mixture and toss. Finally, I'll add lots of fresh parmesan. Early dinner tonight as I'm off to see a French film - Le Chef at a Films for Foodies night at the Tower Cinemas - awesome!

Wednesday: I'm off to Sydney for a work meeting, so I'll buy the fixings for home-made pizza for my gal and hubby to make.

Thursday: I think it's time for some pork cutlets with apple slaw. I cheat with this. I buy a 'gourmet coleslaw mix' (one that has red cabbage in it) and then I'll slice apples into cheeks and slice them thinly. Then I'll roughly chop some whole almonds. I combine all this and add some mayonaise with lots of lemon and garlic added. So good.

Friday: Hubby's going out with some buddies to the pub, I'll make a garlic prawn fettucine. You know what? I finally succumbed recently and bought frozen green prawns. Nigella uses them so they must be okay, and you know what? They are. I'll simply add them to a pan with some olive oil, lots of garlic and cook till they change colour. Then I'll throw in some fresh breadcrumbs and fry till golden, add a sloosh of white wine and toss through pasta. Throw on some chopped italian parsley at the last minute.

Sunday: pork belly roasted on a bed of rhubarb. So simple. Score the top of the pork belly and rub with olive oil and salt. Season the underside with salt and pepper. Place a bed of rhubarb the exact size of the belly in a pan. Add some thyme sprigs. Place the pork over the rhubarb. Add to a smoking hot oven - 220 degrees and immediately turn the heat down to 150 degrees. Cook slowly for three hours. Serve to rapturous applause with lots of roasted vegies. That rhubarb will become a caramelised delight - far superior to any apple sauce you've ever served with pork. No rhubarb? Use apples or pears. Go on - you will NEVER regret it.


Posted by PinkPatentMaryJanes at 8:00 AM