where do we go now - film review 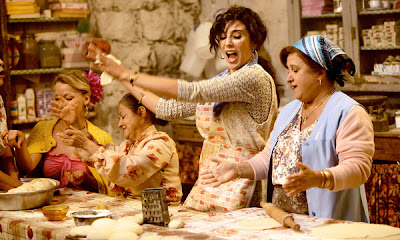 I was surprised by a film tonight. While I'm a huge fan of foreign films I must say that I rarely skip beyond the borders of France... sometimes I'll step over to Italy, but I'm pretty conservative in my viewing habits. However, I had the opportunity to attend a preview screening of Where Do We Go Now and decided to move outside of my comfort zone.

I'm pleased I did.

See that gorgeous woman in the apron above? She's not only one of the stars, she's also the writer and director of this powerful film. Set in a remote, seriously war-torn Lebanese village this film powerfully depicts what happens when a town's Muslim and Christian men start to get angered and antagonistic like the rest of their country.

Well, that's where the women of the town step up and the fun begins.

This film is in turns satirical, poignant and heart-wrenching. There's levity to relieve the pathos - thank goodness - but the film never veers into pantomime. The performances are stunning, and there are so many strong, likeable (or loathe-worthy) characters it's easy to become immersed in the plot.

Sometimes it pays to check out something unexpected. I walked out of the cinema with a smile on my face, and a lot to think about.

Bravo Tower Cinemas - you've brought another great film to this town.
Posted by PinkPatentMaryJanes at 9:18 PM