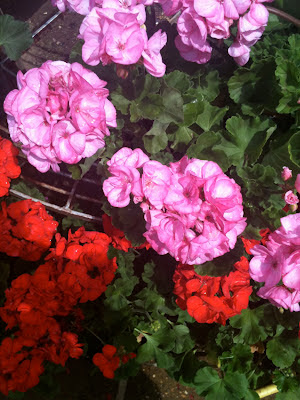 I do believe that red and pink geraniums are one of my favourite happy-making flowers. They remind me of window boxes in Paris, and all of France. Driving around France I noticed that even in the smallest of towns people would make the effort to pretty up their homes with window boxes or small gardens featuring brightly coloured blooms - often geraniums.

So, of course, I've had to install them myself. On our loungeroom windowsills are three planter boxes filled with alternating red and pink geraniums. I've grown them from cuttings from my mother-in-law's garden and they've finally taken off. It's too soggy out there to take a photo today - so, instead, here's a photo I snapped at Petersham Nurseries on our UK holiday last year. What a glorious place that was...

Hey, what are your plans for the weekend? My daughter has a pupil-free day today - and a headcold. So I'm feeding her up and dosing her with lots of water so she recovers quickly. Tomorrow's netball {head cold permitting} and then my gal has a friend over for a sleepover. We're going to try the new Mexican place in Hamilton - La Casita. It's had reviews from some pretty food-loving peeps so I have high hopes.

Sunday I'm spending the day at a netball coaching clinic. Even though I've been coaching for years I do like having the opportunity to brush up on my skills and learn new techniques. I'll just have to organise for a decent coffee delivery during the day. Anyone?

Enjoy your friday and your weekend. x
Posted by PinkPatentMaryJanes at 12:46 PM