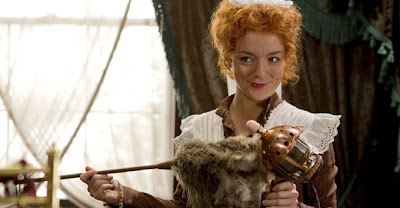 It seems almost inconceivable that just over 100 years ago, doctors were adamant that there were no such things as germs - but believed that more than half the women in the world suffered from a terribly debilitating condition known as Hysteria. This 'disease' was caused by a malfunctioning uterus, and while there were 'cures' such as radical hysterectomies and incarceration in mental institutions, one doctor found a more popular approach to help...

Young Doctor Mortimer Granville (Hugh Dancy) is an earnest, progressive young man - totally misunderstood by older, stuck in their ways medical professionals. He can't seem to hold down a job until he finds a position with Dr Dalyrymple. See, Dr Dalyrymple's found a method to help the uterus bounce back into shape, and it involves, um, well, stimulation of a most unusual kind. Pelvic massage in fact. But a very concentrated form of pelvic massage that really hits the spot. It's no wonder his waiting room is filled with expectant women.

This film is a giggle-fest, primarily thanks to some absolutely stellar supporting cast (including Molly in the shot above). What could have been tacky is instead rendered hilarious thanks to some fabulous performances. Maggie Gyllenhaal is stunning as the feisty suffragette daughter of Dr Dalrymple - the perfect contrast to her younger sister who's the poster child for demure young Victorian women.

Based on a true story, this film could almost be viewed as a documentary of the times - a time when women were meant to concentrate on running exemplary homes, raising their children - and being denied a jolly good time in bed. Great performances, an interesting storyline and lots of laughs - this ticks my box for a fun night at the movies.

I saw this last night at The Tower Cinemas, Newcastle as guest of a special preview screening, a long with lots of other laughing patrons. Need a giggle? I recommend this.


Posted by PinkPatentMaryJanes at 8:58 AM