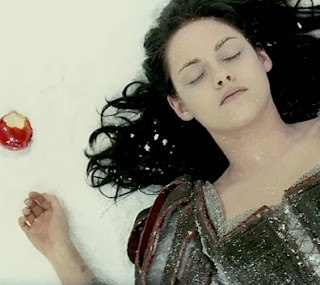 I think that going to the movies is one of my favourite things. Sure, you can watch them at home, in the comfort of your own loungeroom, but it's just not the same. I like getting a little dressed up and catching up with a friend over a movie. It makes me happy.

My gal's inherited my movie-loving-gene. So I took her and a pal to see Snow White and the Huntsman on Sunday. I was a bit unsure, it was rated M and they're only 12 and 13  - but we did our research and they were both fine about it. And I was there if need be.

I needn't have worried, there was nothing sleezy or too scary in this film. 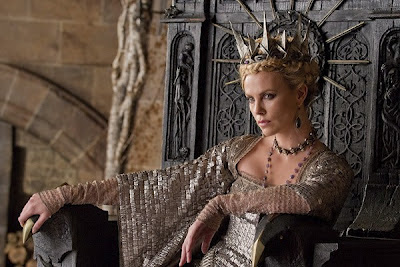 Visually this is one damned sumptuous film. Charlize Theron's costumes are utterly brilliant, the fabric, the designs - and oh, the black raven cape? WANT!

This film hearkens back more to the original Grimm fairy tale than anything produced by Disney. And it's awesome. I really enjoyed it, and the girls did too. Snow White's a pretty kick-ass chick - and as for Chris Hemsworth as the Huntsman... hello!

I found the narrative fascinating, the whole concept of beauty and youth as power still resonates today. Great performances, gorgeous special effects and an interesting storyline work together to create a film that's worthwhile viewing for teenage girls in particular. It's all about facing your fears, finding your strengths and generally being awesome.

What's not to love?
Posted by PinkPatentMaryJanes at 6:53 PM