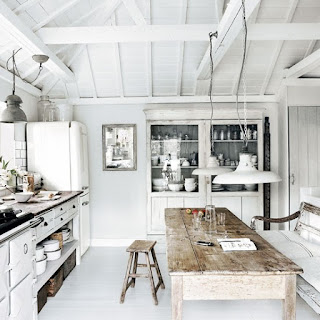 This whole speedy-gonzales-time-thing is doing my head in. Seriously, is it nearly the end of August already? Sheesh. Luckily we have a quiet week this week, so I'm going to make it simple food-wise as well. Here's what we're eating:

Tuesday: I have my exercise class at 7pm, so I'll prepare a pasta bake we can all eat whenever we're ready. I made a tasty chicken and chorizo pasta bake last week that was so simple, and such a success I'll make it again.

Wednesday: No netball training this week. Sadly the girls were valiantly defeated in their semi-final. They played their little hearts out though and I'm ever-so-proud of them. I think I might cook up a quiche tonight - bacon will do. And serve it with a salad. That'll be nice.

Thursday: I'm off to a friend's house for a catch-up so I'll make some butter chicken for dinner. Serve it with rice and naan.

Friday: Don't you think friday calls for fish and chips? I do. So that's what we'll have.

Saturday: The Darby Street Bohemia Festival was cancelled earlier this month - but it's back on again tonight. We'll head out there and grab something to eat on the night. That'll be fun.

Sunday: We're going out for lunch for my niece's birthday today, so dinner will be light. Perhaps just a roast chicken and a simple salad.

And that's it. So, tell me, what's on your table this week?

Posted by PinkPatentMaryJanes at 7:00 AM