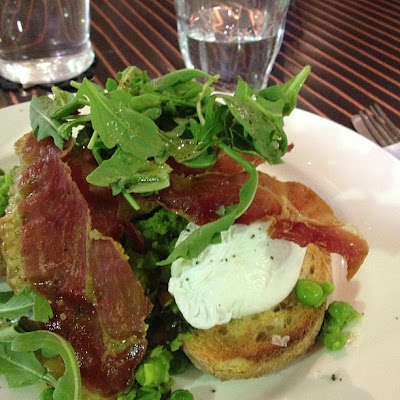 Have a look at this.

Isn't it divine? It was my lunch yesterday. A pea and mint crostini with a poached egg and crispy pancetta. It was masterful. The peas were fresh and light and perfectly studded with mint. The egg was poached brilliantly. I am kicking myself that I didn't take a shot after I'd cut the egg open so that the perfect yellow yolk oozed out.

But take a really close look. Look at that rocket. See how it glistens? It's because it's been dressed (with, if I'm not mistaken, a superb extra virgin olive oil).

Oh yes, there are some places who have such respect for the food that nothing is an afterthought. An inedible garnish thrown on to add colour. What's the point of that?

For years I've pushed the rocket aside and eaten my meal. And at the end, a pile of sad leaves has decorated my plate. What a waste. And I nearly did that yesterday until the rocket seemingly winked at me.

Watching a chef take pride in a plate. Seeing everything placed just-so. The dish wiped with a clean cloth before going out. That's a joy.

Where was this masterpiece served? At The Essential Ingredient on Darby Street Newcastle. At Quint Cafe. I shouldn't tell you this as the place was pumping yesterday with people in raptures over their food. But hey, while I like to keep a secret, some are too good to share. It's not the first time I've raved about Quint. And it won't be the last. So long as Jace is there casting his laser eyes over the service, I know I'm always going to be delighted.
Posted by PinkPatentMaryJanes at 8:18 AM