we fade to grey 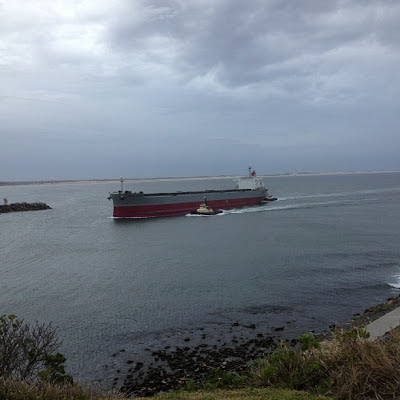 It's funny, grey's my favourite colour - except when it comes to skies. Last night my friend C and I treked up the very steep hill to Nobby's Lighthouse where we sat and had a fabulous picnic dinner under the clouds - that opened just before the film was due to start. The organisers very smartly called off the film, which we'll now see next week, as that rain set in all night.

But we got to see some awesome things. For example, as we were walking along we saw a dolphin diving through the waves off Nobby's beach. And then, while we were picnicing we saw a bulk carrier helped into port by a couple of cute tugs. It's a fabulous perspective of Newcastle atop Nobby's Lighthouse - I can't believe I've never been up there before, particularly as it's open most Sundays.

If you're in Newy and you get a chance, get up there.

Enjoy your Sunday.
Posted by PinkPatentMaryJanes at 10:32 AM