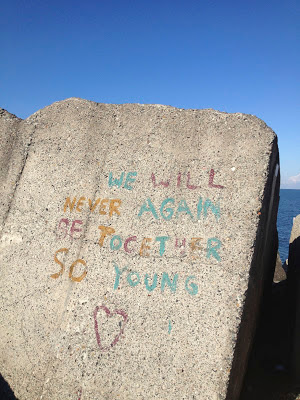 There are many rewards of being a blogger - the main one is the interaction. Remember this post? I was writing about the hidden gems of Newcastle {surprise!} and mentioned my favourite piece of graffiti. Well, imagine, just imagine my delight when I received the following comment:

"I painted the original "we will never again be together so young" with my friends on my year abroad at Newy uni. It was a saying in broken english by my german housemate, which kind of summed up the magic of our year abroad. I'm so sad that it's gone, but it's amazing that it keeps popping up again!"

Tears, tears I tell you.

I'd always wondered about the origins of this saying, originally written in beautiful white cursive script out on Nobby's breakwall. And now I need wonder no more.

I think the definition was even better than anything I'd come up with in my imagination.

So, for you, oh fabulous Anonymous one, here is the latest version that's appeared right at the tip of the breakwall.

Swoon.
Posted by PinkPatentMaryJanes at 4:06 PM