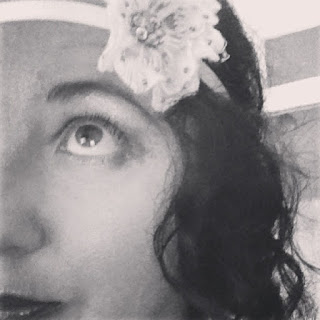 Well, last night I frocked up, tucked my hair into a faux-bob and went with my friend C to check out The Great Gatsby. It was a fund-raising night for the Newcastle Museum and everyone went all out with the clothing - including the fabulous F who had the most divine dress I'd ever seen on {she'd had a Great Gatsby birthday party a few weeks ago and bought the most legs-a-liscious dress I've ever seen to wear. Swoon!}

After a glass of bubbles in the foyer we settled in to see the film. Well, most of us did, some women to our left just carried on their conversation. RUDE!

If you love Baz you'll love Gatsby. He's returned to form with this film. It's visually sumptuous and the soundtrack is superb. It's not a musical, just very well-punctuated with great tunes. Joel Edgerton nailed the living daylights out of Tom Buchanan. From his opening scene when he rode into shot on a horse he reeked masculinity, danger, arrogance and sex. Brilliant. Leonardo DiCaprio was the perfect choice to play Gatsby, but it took me a while to see him as Jay rather than Leo. Daisy was played delightfully by Carey Mulligan. She was sweet, gullible and made me so frustrated I could cry. Her frocks were also utterly divine - she was a visual feast in every shot. Also she sure knows how to use those eyes of hers to great effect in some very understated yet powerful acting.

The script adhered nicely to the plot of the novel and I was left with the same combination of aching sadness and lightness that I felt after reading the book. I was also left with an unquenchable thirst for Moet which featured strongly in every fabulous party scene.

I also feel the need to dance - can someone throw a Gatsby-style party with lots of dancing, champagne and fireworks for me?

Recommended? Yes. Perfect? No, but neither was anyone in this film or the book. I think the book's done justice with this film, and I find that the more time goes by, the more forgiving I am of its flaws and embracing I am of its strengths.

PS: frock up before seeing it - you'll feel much better.
Posted by PinkPatentMaryJanes at 1:07 PM