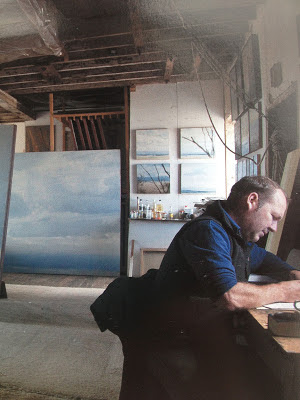 If you follow me on Instagram you'll see that I spend quite a bit of time photographing the harbour, the ocean, clouds and sunsets. I'm always trying to capture that perfect moment that delights me - so I can share it with others. Sometimes I succeed, but it's always a two dimensional version of something spectacular.

So when I heard of the Philip Wolfhagen Illuminations exhibition at Newcastle Art Gallery I was intrigued. The pieces of his work I saw in the promotions seemed to beautifully capture those moments that entranced me so. On Friday afternoon I was blessed with the opportunity to look at the new exhibition before it opened, and to speak with the man behind the works.

Philip Wolfhagen is Australia's foremost landscape artist. He captures those moments in time where nature, the light and the seasons combine to form the most exquisite scenes.  Wolfhagen then frames these scenes, gives them a personality and he takes us there.

This exhibition marks the first time that Wolfhagen has seen his works together in the one place - and he is suitably impressed. Newcastle Art Gallery has scored a coup is securing the opening of this exhibition, and I think it's an exhibition that Novocastrians will embrace as their own.

There's a luminosity to his work, that I've never seen before. Each piece is utterly delightful, and, when viewed en-masse it's an uplifting experience.

It's the shades that speak so eloquently to us in his art. Working from a palette of what he describes as the four primary colours: red, blue, yellow and violet, Wolfhagen can spend hours mixing colours on a large glass bench to find just the right hue. Often he'll try to replicate a shade used in one of his past works, so he'll mix, dab it on to the older painting, then smudge it off with his finger. If you look at his works in just the right light you'll see dull patches where colours have been tried, tested, then tried again. 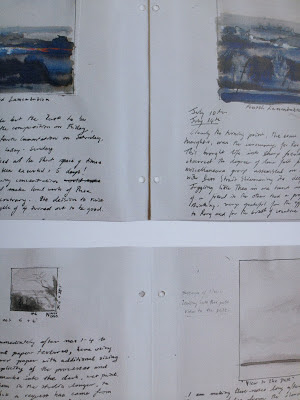 Working from a combination of memory, photographs and notes - Wolfhagen captures a new side of the Australian landscape. It's not the sunburnt country of old, but something vibrant and luminescent. This is a fresh view of Australia: a rich meld of violets, blues, greens and their many silvery tones. Landscapes are seen anew through Wolfhagen's eyes. They're complex, with layers and hues that change with our moods and the eyes we've viewing them through.

The luminosity in Wolfhagen's work lies in his techniques and the manner in which he mixes the paint using ancient techniques and a little something special. Beeswax is mixed with the oil colours before painting and this technique really helps the works glow, giving greater depth and luminosity to the colours and textures. The fact that there are no readily identifiable landscapes in his work means that its possible to place yourself before the painting, and feel like you're engulfed in the landscape. There's a chance it's reminiscent of a cloudscape you've experienced, somewhere you've stumbled upon in your travels. If it's somewhere you haven't been, it's somewhere you'd like to be.

These works are rare in that they offer much to the experienced art lover, but also form the perfect entry point for those who feel they don't really 'get' art. There's an accessibility to these pieces, with a work to touch every heart. Spanning decades, it's fascinating to see the progression of his works. One of my favourite duos is Transmutations no 1- solid (1997) and Transmutations no 1 - liquid (1997) where Wolfhagen has taken a solid landscape, and transferred the shapes and forms into a seascape. Walking around the Gallery Wolfhagen told me that Transmutations no 1 - liquid comes from a private collection on Martha's Vineyard and it took a lot of negotiation to get it to Australia. I'm glad they succeeded, the colours in this piece are simply breathtaking, and the transformation from solid to liquid is stunning.

Wolfhagen says that it's his most minimal works that please him the most. Working with a simple three colour palette there's an extraordinary complexity and depth to the more minimal works. The First 5 Days of April, 2011, is a stunning example of this. One scene, over five days, with many, many moods and hues.

Wolfhagen's paintings are not only influenced by what he sees, but by what he's experienced. I think that's what makes them so extraordinary and enjoyable. Wolfhagen is enthused by what he sees, and wants to share his vision with us through the art of landscape painting.

I'm so very grateful that he did.

Illuminations by Philip Wolfhagen is on display at Newcastle Art Gallery from June 22 to August 11. It will then tour Tasmania, Australian Capital Territory, NSW and Victoria.


images are copyright Philip Wolfhagen
Posted by PinkPatentMaryJanes at 1:23 PM