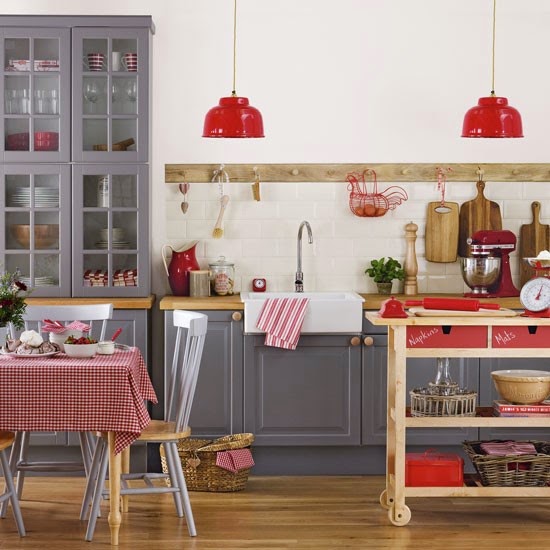 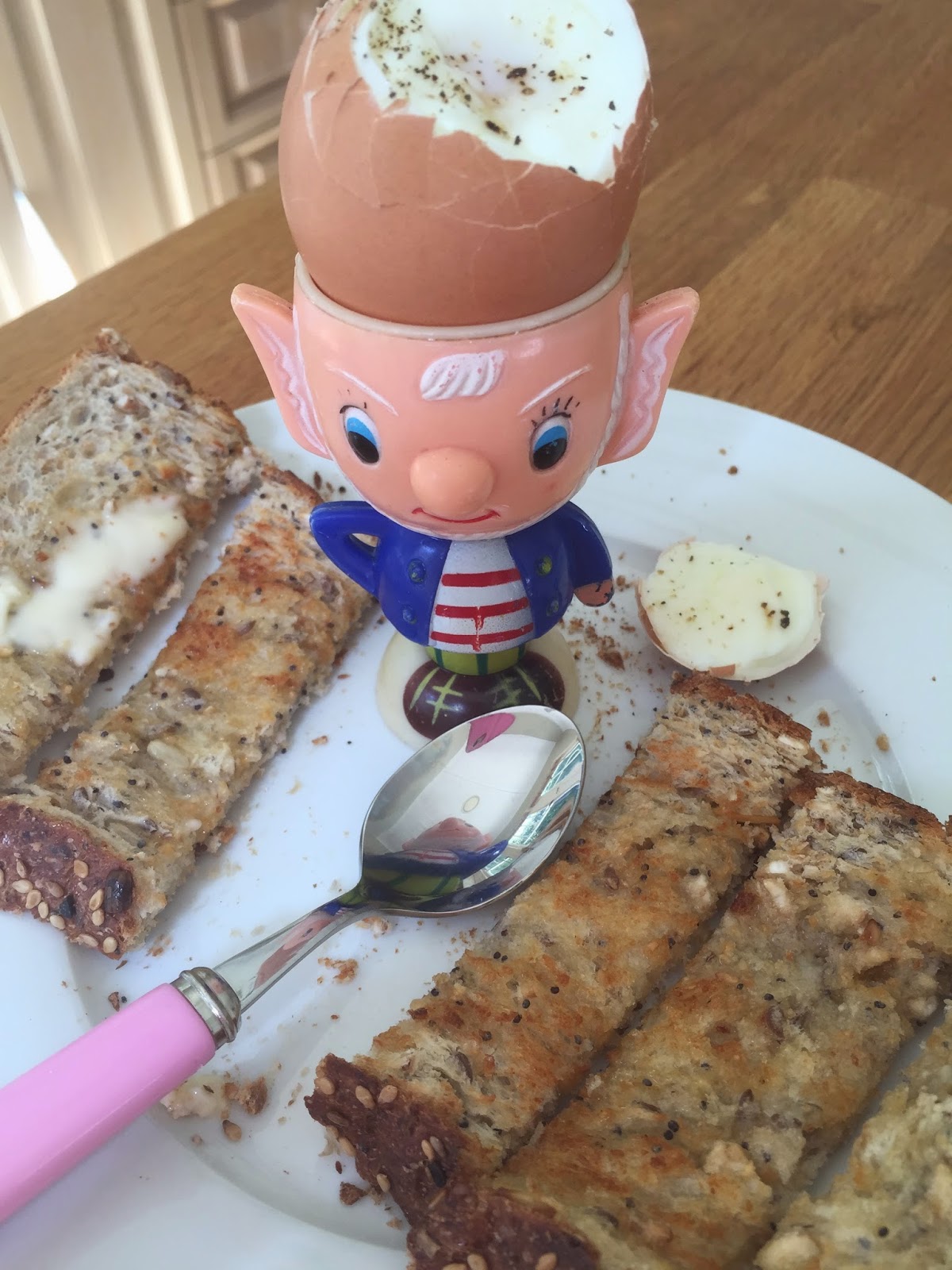 You know that thing where you think of a food from your childhood and you just have to have it and then you have it and it's ever-so-good? 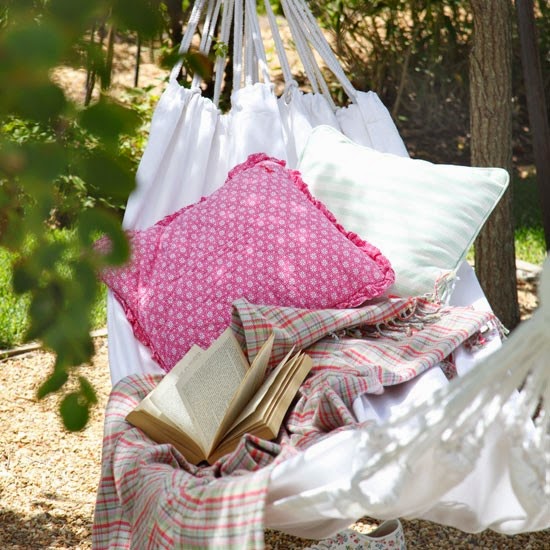 
Yep, that's just about it. I think that, with a hammock, my life would be pretty much complete.

There is nowhere better to lie and read than a hammock. Not a bed, not a couch, not a sunlounge.

So, I shall now endeavour to find said hammock, clean off the side veranda, and install it post-haste.

stories in our steps 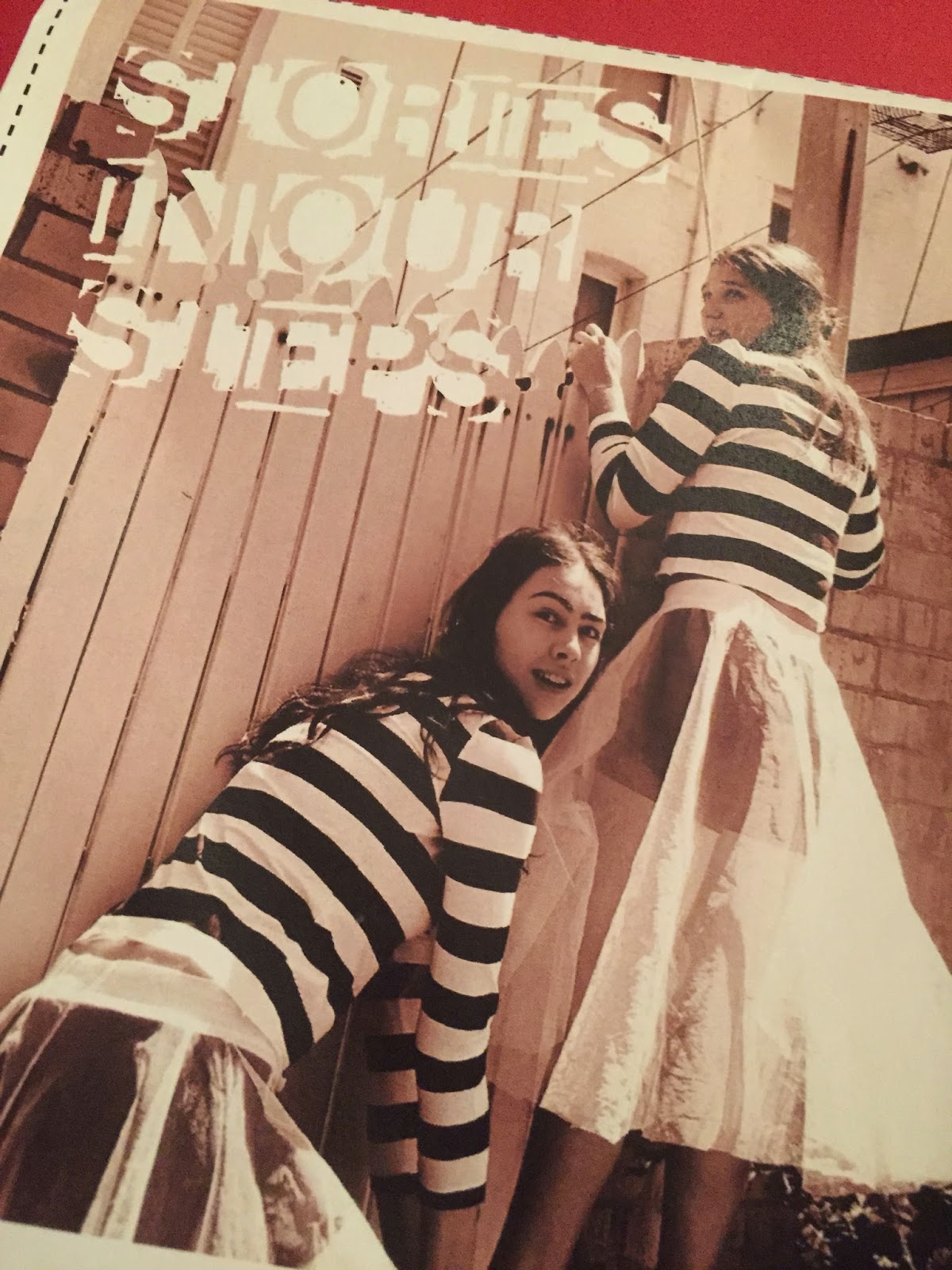 So, this popped into my facebook feed last week: Stories In Our Steps by Tantrum Theatre company. I enjoyed last year's Diving Off The Edge Of The World so thought I'd book tix to see it with my parents. I expected to enjoy it, I didn't expect to be utterly blown away by it.

We started up on the hill overlooking Newcastle Beach where we were welcomed by our Time Travelling Guide. The show opened with the beautiful Awabakal dance and story welcoming us to their country and the night. 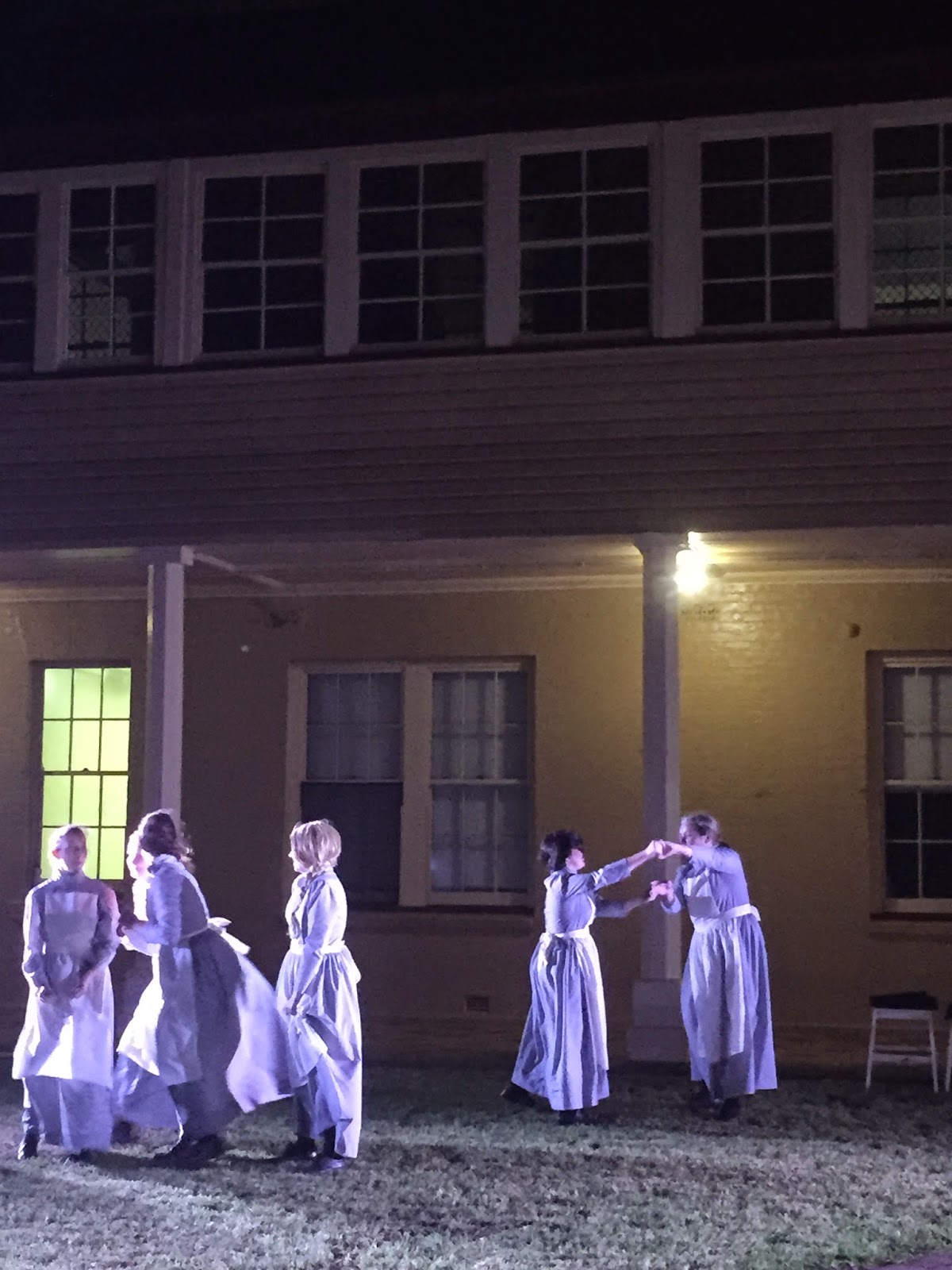 Then we walked inside James Fletcher Hospital Barracks, an historic site that I'm embarrassed to say I've never visited. It was the home of the Newcastle Industrial School for Girls (wayward girls!) way back when, and we saw their story told powerfully by brilliant young performers.

These performers kept in character magnificently, telling the story of young girls without a chance, without hope and without love. 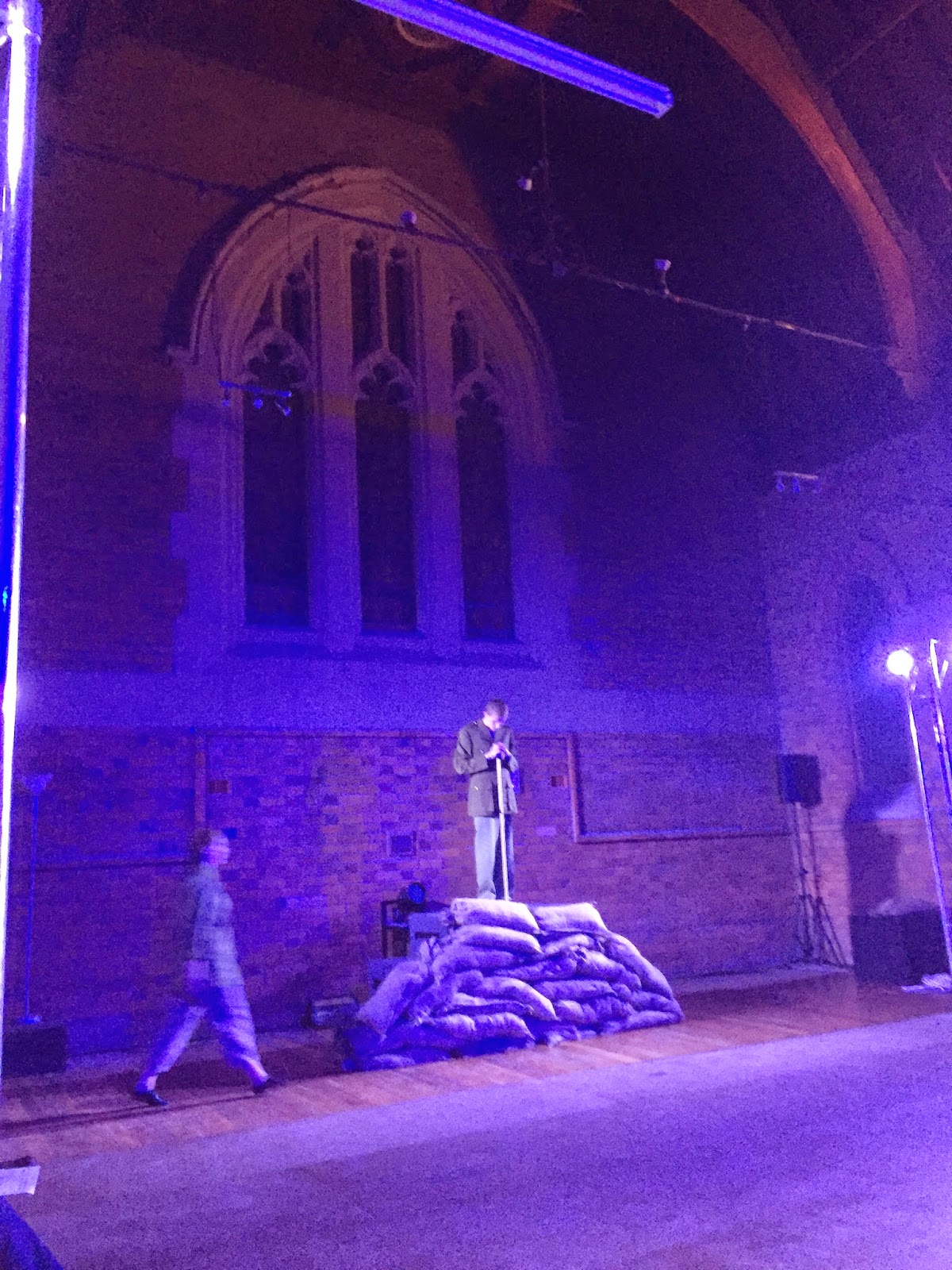 Then we meandered down to St Phillip's Church, home of Tantrum Theatre, for Warriors Rest. I knew that this performance was choreographed by renowned choreographer Cadi McCarthy so I expected something special - but I didn't expect to see the best dance performance of my life.

The heartbreaking story of five brothers from Newcastle who enlisted in the war is told through words and dance. Oh, is it told through dance.

The choreography for this was brilliantly devised, and magnificently executed by every performer. Not only did they dance beautifully, they all held their character every single second of that performance. This historic church was lined with church pews, and we were mere centimetres from the dance action at times.

It was stunning, it was powerful, it was utterly beautiful. 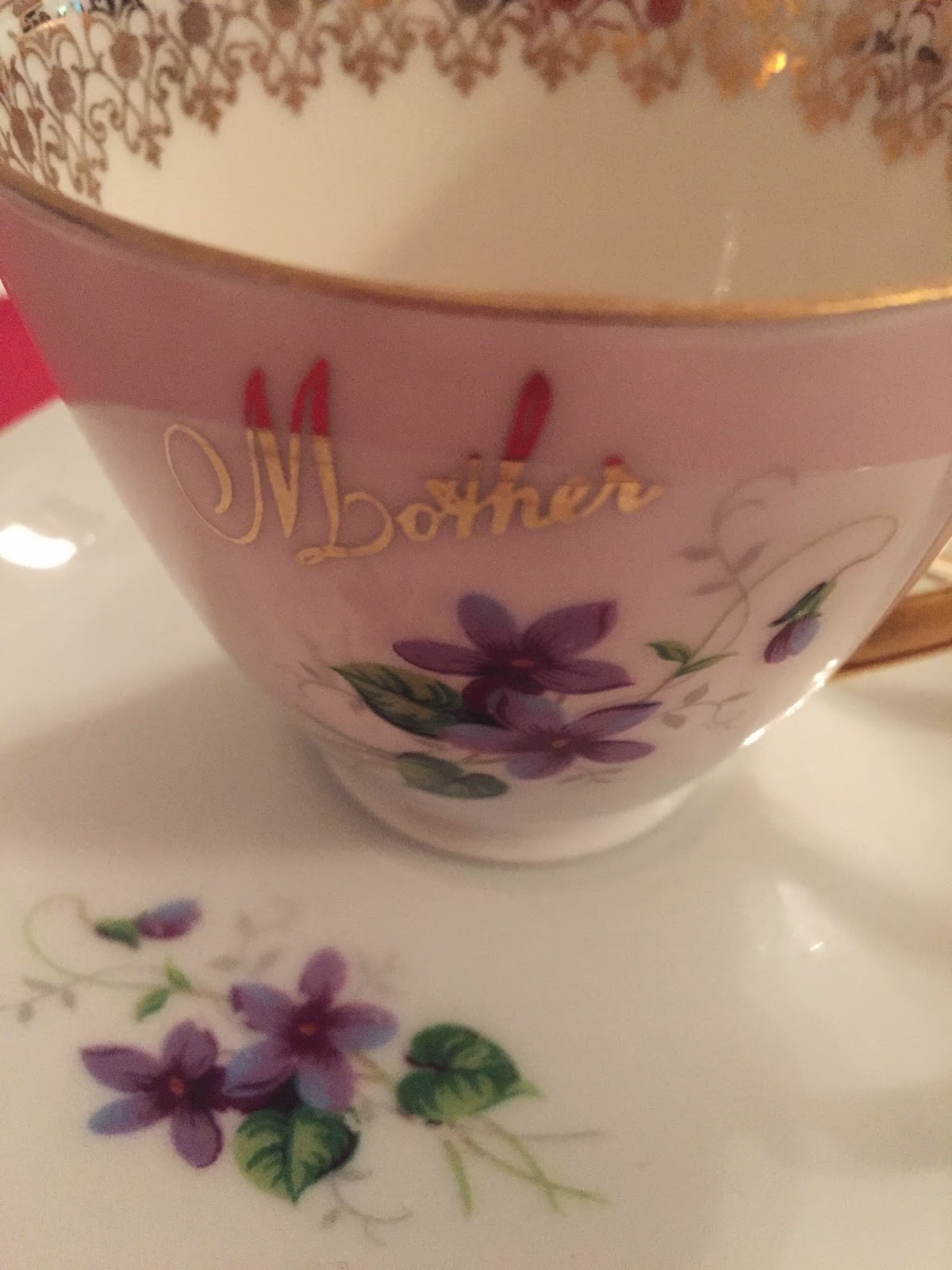 I needed that moment to recover from the intensity that was the act before.

We then went next door to The Beach Hotel, which was cute as a box of buttons, with the youngest performers performing their hearts out, on the site of the former hotel run by a circus owner and staffed by his performers. What I wouldn't give to travel back in time for a bevvy there... 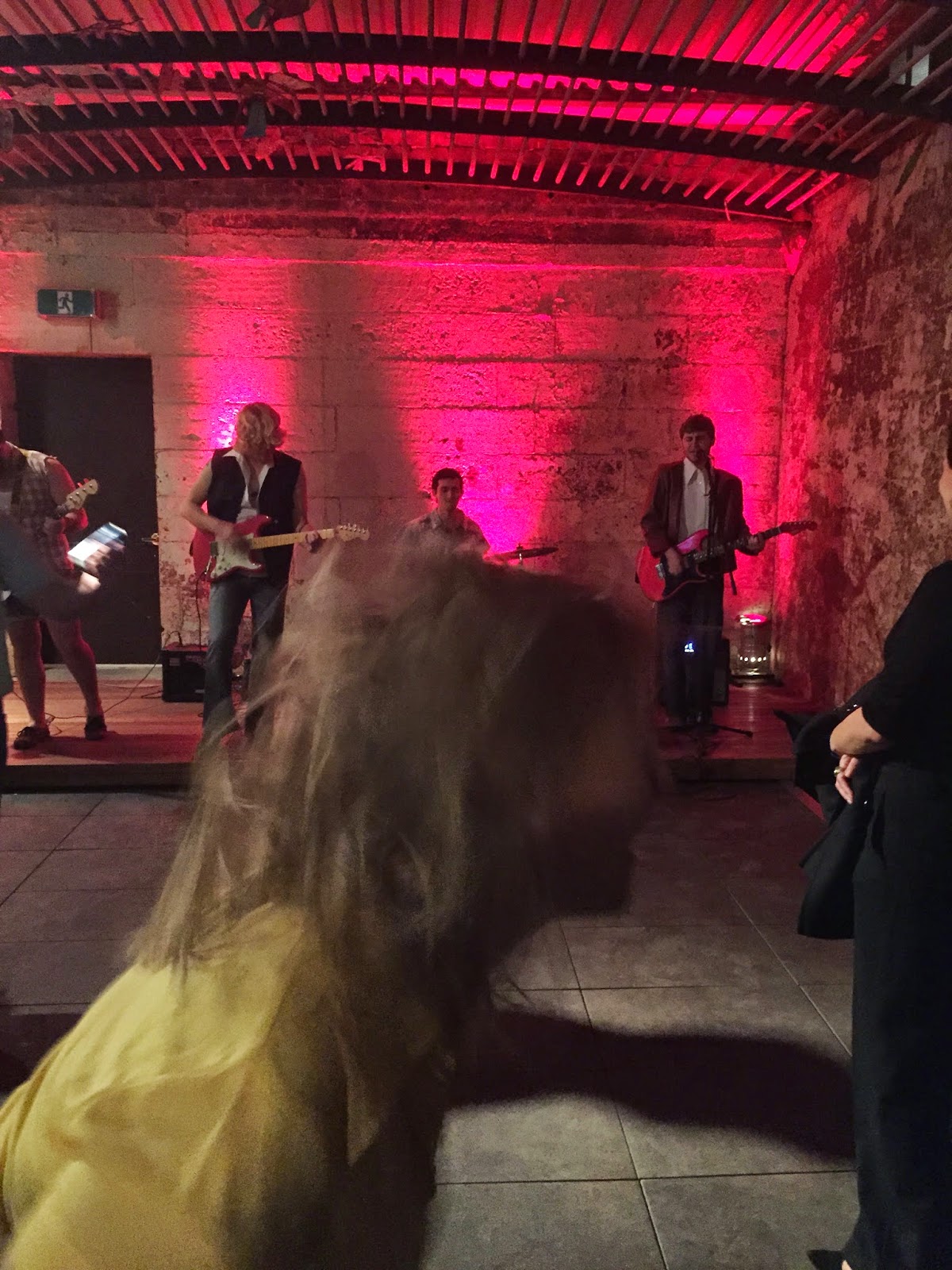 Then we wandered down to The Lock Up for The Star and the Slaughter where we relived the night of the infamous Star Hotel riot.

Now, my respect for these young performers was already pretty huge, but imagine walking in to the old cells to see 'drunken' youths slouched insolently against walls, or sprawled over tables. Amazing performance art.

Then the band played, and the dancing began, before the police came to call 'lights out' and the riot began. I've always thought that the Star Hotel riot was just a bunch of drunks going out of control, but this performance really gave historical context - in a spectacular fashion.

Then the band played a final encore of Star and the Slaughter by Heroes which needs an entirely new book of superlatives for me to do it justice.

The tour ended in Pacific Park with wee time travellers interviewing each other about the future. It was uplifting and a sweet way to end the show.

Our fabulous guide bid us goodnight, and we walked our way up the hill home. 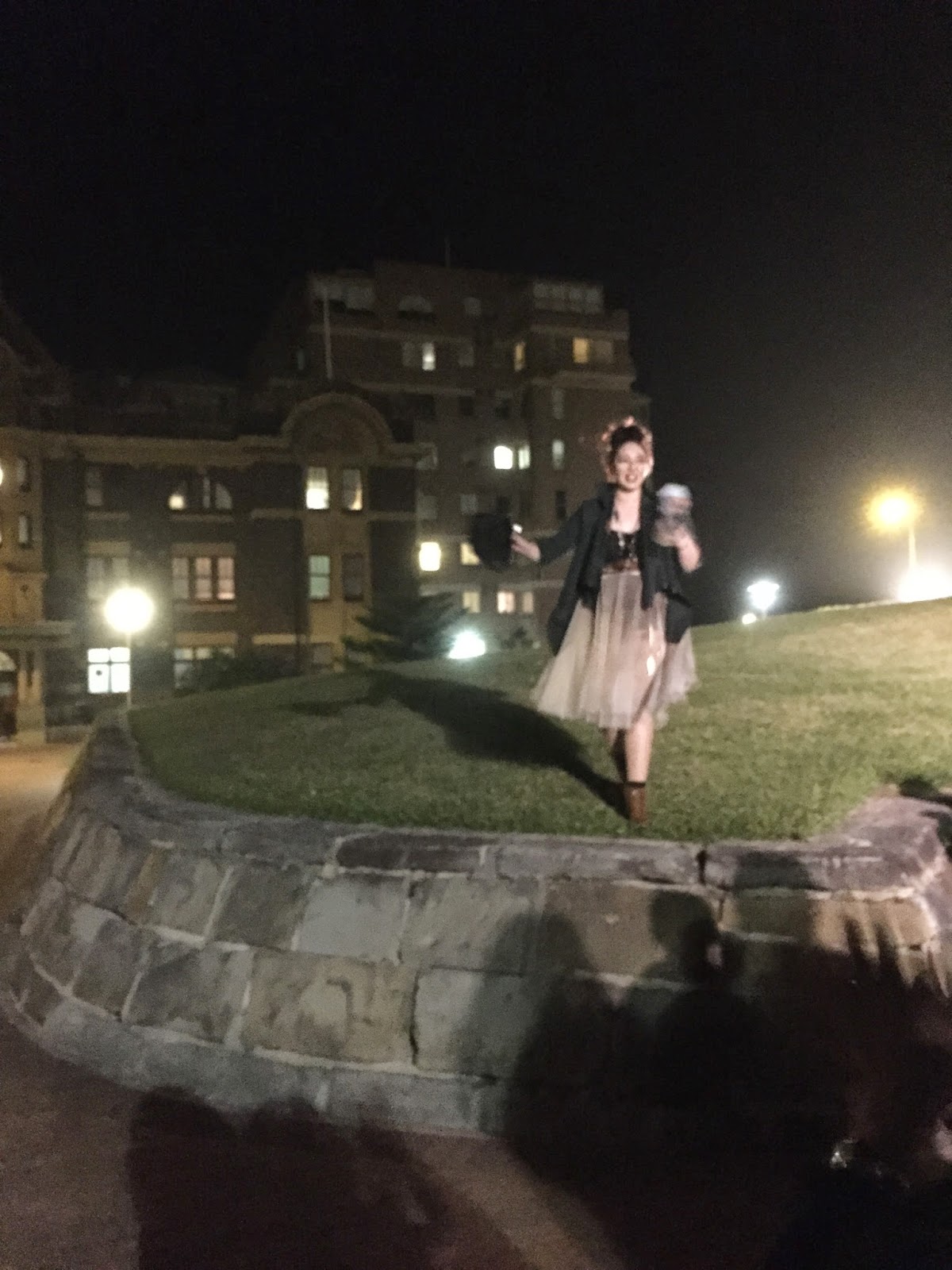 If you're in Newcastle you must see this. Here's a link to the show. Tickets are insanely cheap and the performances are world-class. Seriously, I'd go again just for the dance alone.

Bravo Tantrum Theatre company - you do Newcastle proud.
Posted by PinkPatentMaryJanes at 9:23 AM 2 comments:

Email ThisBlogThis!Share to TwitterShare to FacebookShare to Pinterest
Labels: newcastle, Stories In Our Steps, Tantrum Theatre 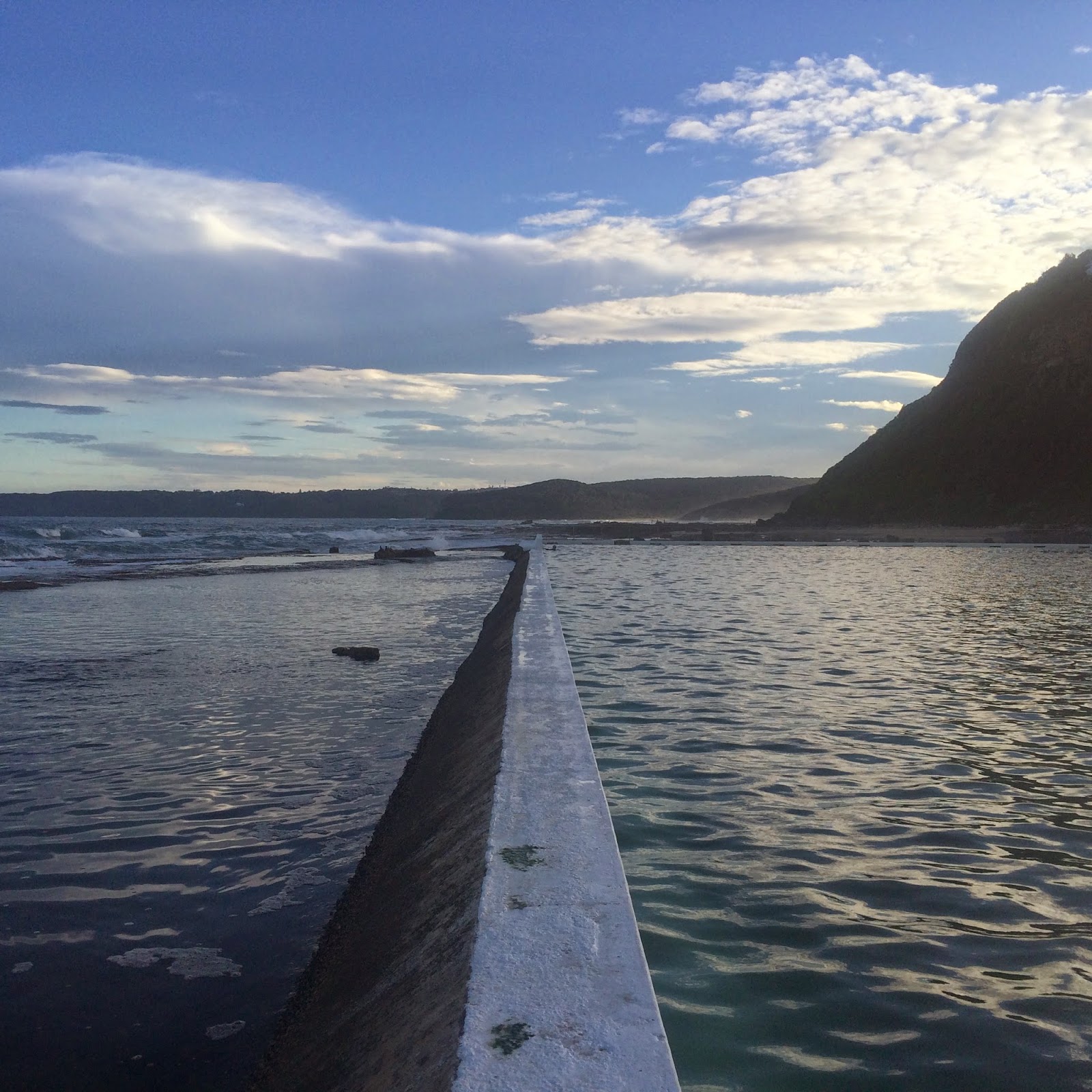 The thing I love most about the ocean is how the hues change with the minutes that tick away. Early in the morning it's gloriously vivid with the brightness reaching a peak around midday.

But my personal favourite time is just on dusk.

When it's an icy blue, with iced shades of mauve and pink and silver accents. 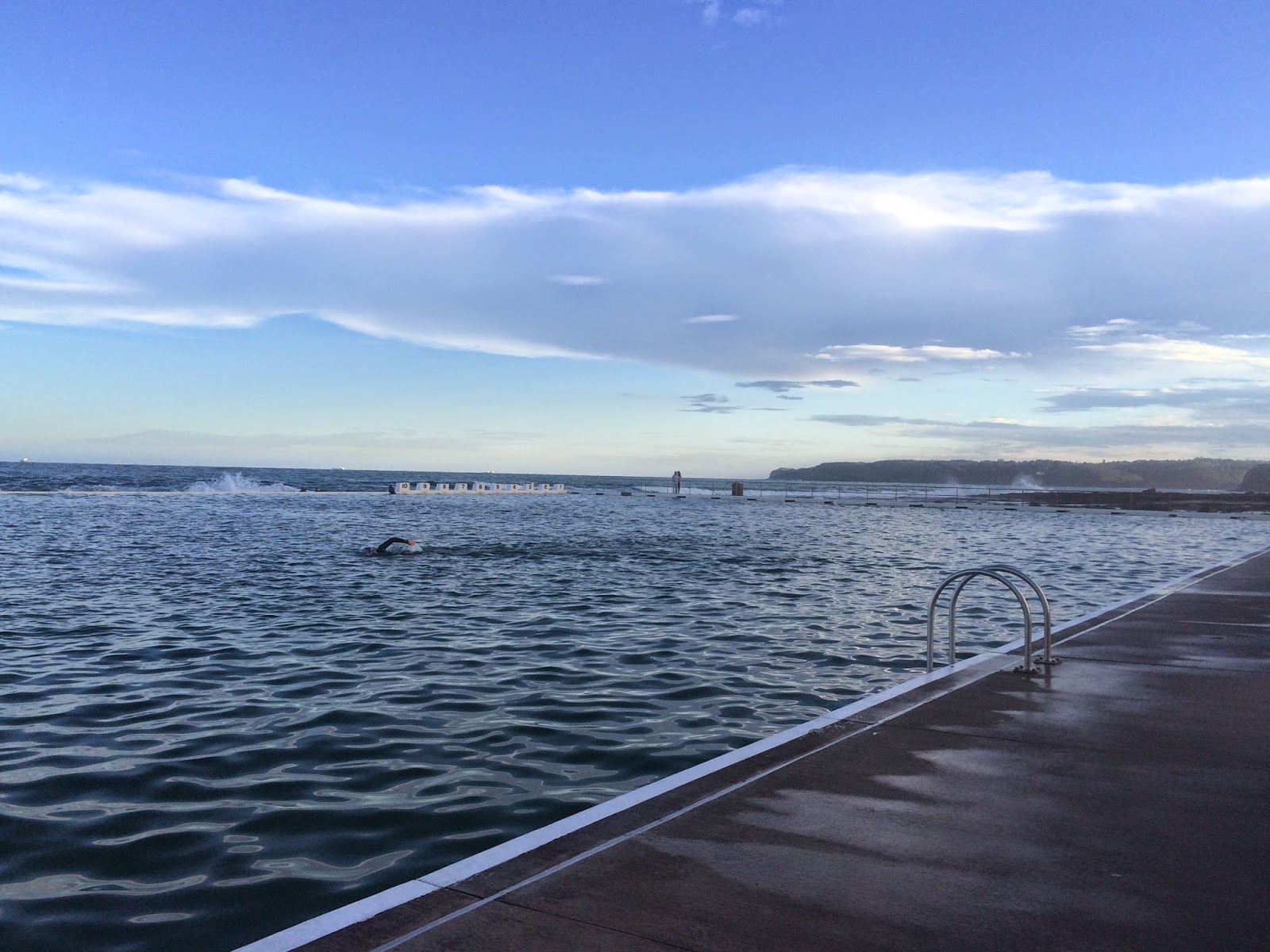 Nowhere is it more glorious than at Merewether baths. I'm sorry, but it's not. 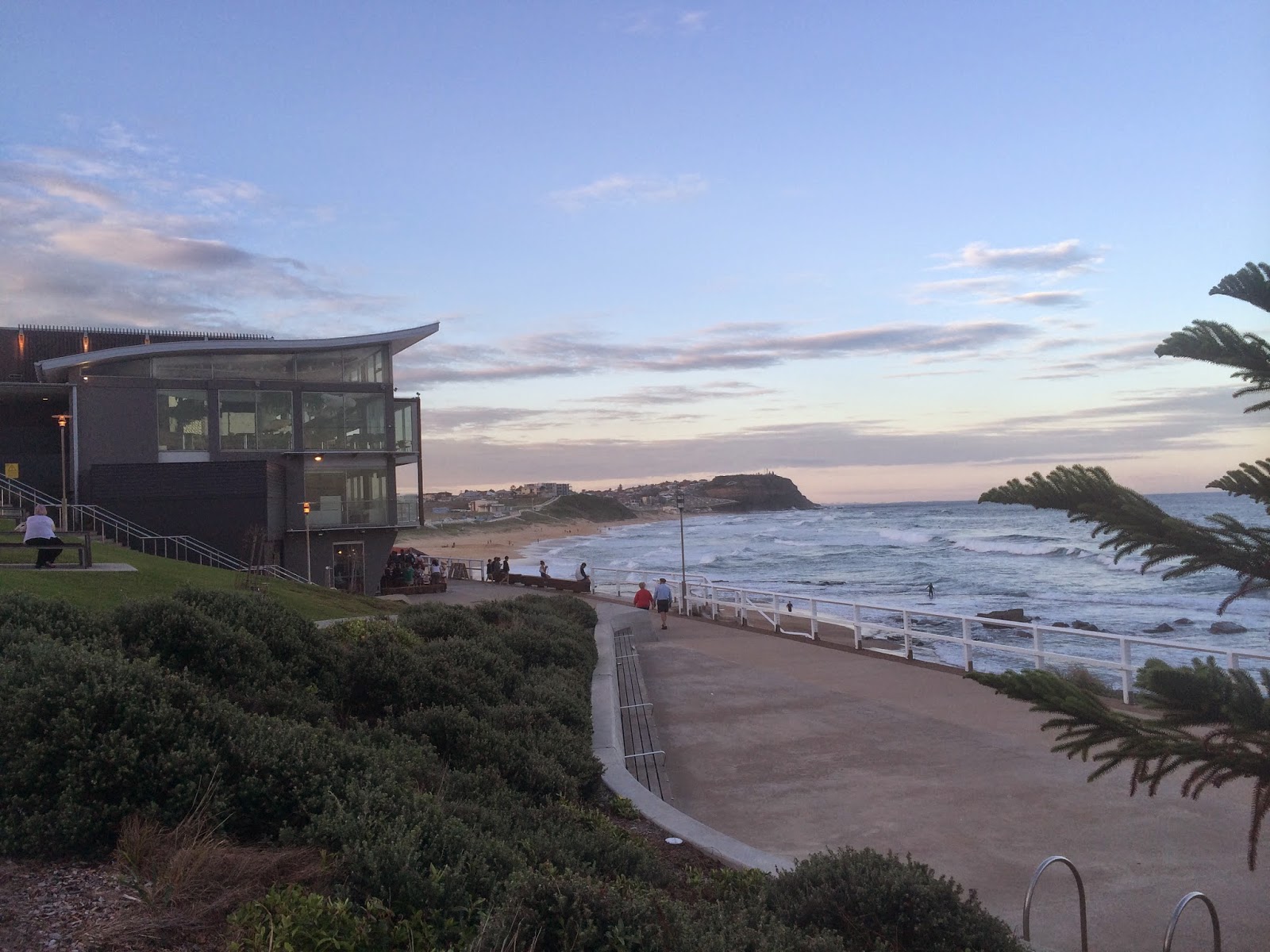 How's the serenity - I ask you.
Posted by PinkPatentMaryJanes at 3:21 PM 3 comments:

Email ThisBlogThis!Share to TwitterShare to FacebookShare to Pinterest
Labels: pics by my hubby - I was too busy swimming. 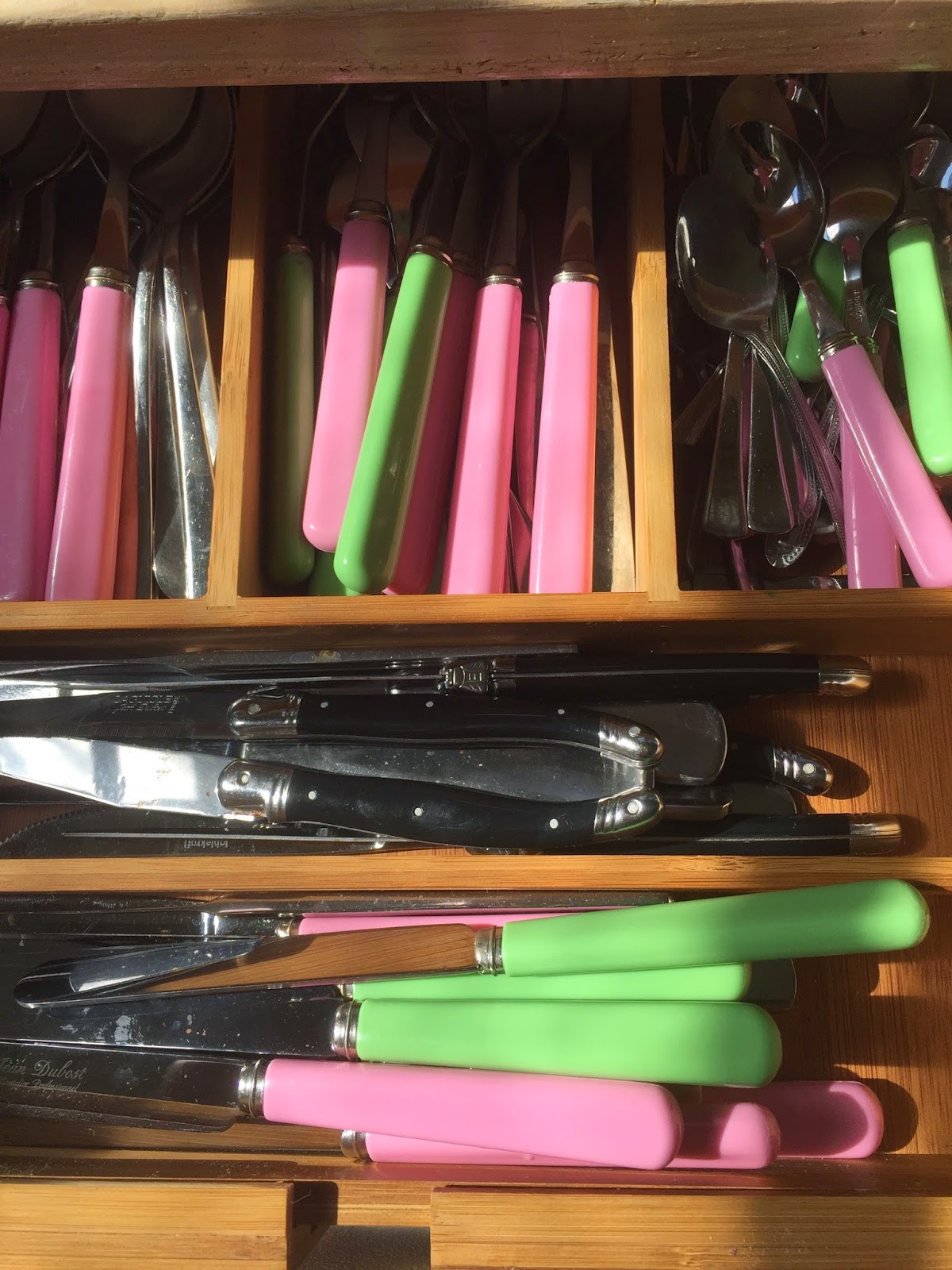 It's the little things in life that bring me joy. For years I've stared at the cutlery organiser in my kitchen and thought "I really need to replace that". It was old, and starting to do that weird thing where it looks dirty but it's just discoloured.

So, at Aldi the other day, in the magical middle aisle, was one single solitary adjustable timber cutlery organiser.

I brought it home, ripped out the other one, and popped this one in.

At first I was sad as my knives didn't fit in their traditional spot on the upper right-hand-side.

But then I came up with a new idea - butter knives and steak knives down the bottom and teaspoons up top. I KNOW!

Now, every time I open my drawer I smile. I see my pretty pink and green Cath Kidston cutlery, and my Laguiole steak knives from Monoprix in Paris and feel that all is right in the world.
Posted by PinkPatentMaryJanes at 10:04 AM 2 comments: 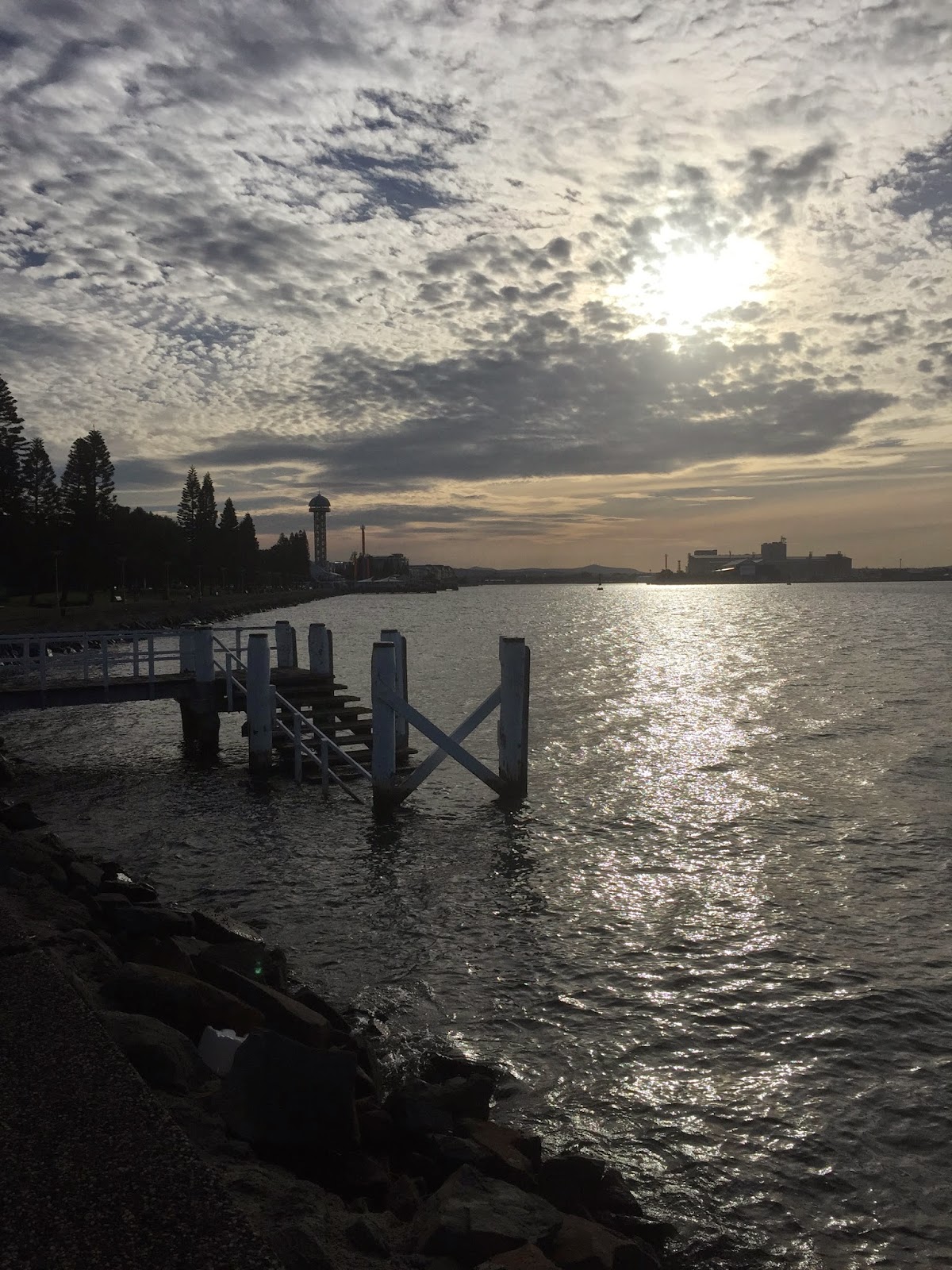 I don't cycle anywhere near often enough at the moment. Which is terrible - because look at what I get to look at on my rides.

Newcastle's working harbour is just crazy-pretty. And when I see a tug choof in to view - oh my. One day I was riding along and a man was kayaking up the river beside me. Then I noticed a school of dolphin were keeping him company, rising and falling along with his paddles. Can you imagine a more magical moment? Seriously, I reckon the serenity for that dude would last pretty much forever.

Luckily I have my mum and step-dad up this week - and the week off work! So guess how many rides I'll be taking (hint: it'll be at least one per day).

More reading, more riding, more writing - that's what I need to do with my life and the moment.

And more time with friends and family.

Last night I went to the movies with my dear friends, and we saw a rather lovely film What We Did On Our Holidays. It was a hoot - and a howl (in that I laughed and cried a lot). After we all dried our tears we went out for some vietnamese and had quite a good natter and more giggles.

Ahhhh friendship. How important is it? (Very).

Posted by PinkPatentMaryJanes at 8:00 AM 2 comments: 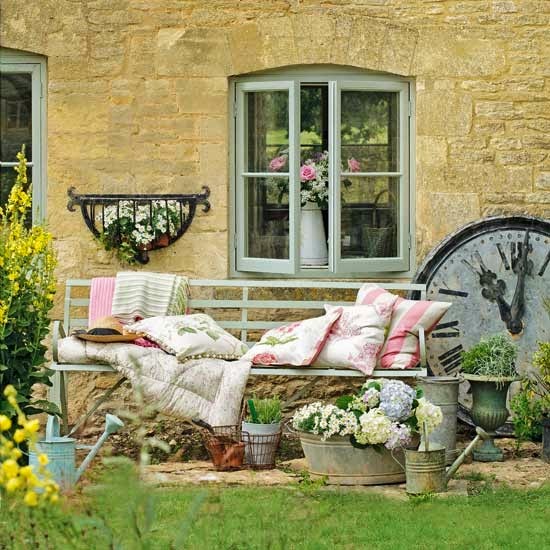 Oh, I do love a long, long weekend. When working full-time you totally appreciate the extra time off don't you? We've spent the last couple of days entertaining the English rellos - sister-in-law, brother-in-law and their two gals. It's been a delight. While it rained horrendously, we still got to do some fun stuff. We had a pizza dinner by the beach, went to the movies (yes all of us) to see Cinderella (and took the other 13-year-old niece!) and then, on Easter Sunday, we had an egg hunt for all the cousins (the younger four) and then a bbq brunch for parents and in-laws (11 in total).

It turned into one of those lazy days where we drank tea and coffee and chatted, while the girls all played. Once mostly everyone left, we went down to Merewether Baths with the english rellos and went for a swim on sunset. Divine. It was spectacularly beautiful.

Life's too short not to spend time with family and those you love isn't it?

Today shall involve lolling around the house and getting the guest room prepared for my parents who are heading back to our place tomorrow. Tonight I'm off to the movie with my gal pals - and for a spot to eat afterwards. How good is life?