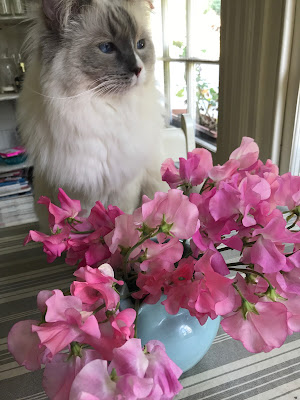 If there's one thing this kitty loves - it's flowers. Put a vase (or, in this case, a vintage milk jug) full of flowers on a surface and he's up there and sticking his face in them. Seems like Louis is just as much of a sucker for sweet peas as I am.

And don't you love how the jug matches his eyes? (oh, and the tablecloth is pretty much the same colour as the kitty?)

I've been absent, busy year. My gal's in Year 12 - counting down the weeks till the end of the HSC. Eep. Where did those years go? She's coping pretty well, and we're pretty much just focussing on getting her through the year as stress-free as possible.

Luckily we have a pretty good end-of-year-celebration planned. The Monday after her School Formal she flies out to London to spend a few weeks with her Aunt, Uncle and Cousins before we join her in mid-December. Then it's off to Bruges for a few days, before training-it to Paris for a pre-Christmas celebration with aforementioned rellos.

We return to London on Christmas Eve, where my brother-in-law and I will cook up a fabulously British Christmas feast featuring roast goose! So excited.

Then we're off to New York so our gal can celebrate her 18th birthday, then New Year's Eve in this fabulous city.

Fingers and toes crossed for a white christmas!

Hope all's well with you. May your spring be filled with sunshine and sweet scents.
Posted by PinkPatentMaryJanes at 12:07 PM 20 comments: 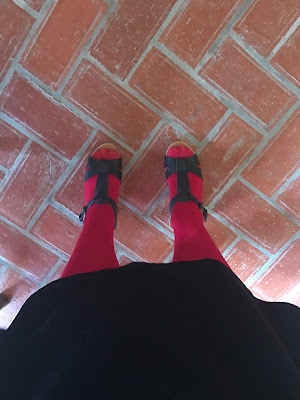 I thought I'd lost my blog.

A few months ago someone hacked our credit card, so we had to get a new one. You know how the biggest hassle about losing a card is working out where it's connected? The biggest pain was my domain registration for my blog.

Many hours of angst trying to find out how to log in to my google account and update it led to the ticking frustration of it being one day before my name expired and "POOOOF!" my blog would disappear.

You know how you only appreciate something when you lose it?

I didn't want to lose it.

So I switched back to blogspot - just in time to work out how to update my credit card details...

See, I couldn't work out how to get google to recognise my domain name (despite my actually owning it for years). Posting in a series of incoherent codes into various pages around the web just wasn't working.

And my blog was gone. For a week!

But then a hero came along.

Brendan from Hyperweb Communications heard my cries of distress over twitter and came to my rescue. And see, it's fixed. Hurrah!

This makes me as happy as my new red tights (pictured above).
Posted by PinkPatentMaryJanes at 3:35 PM 4 comments:

MOFO at MONA oh MY 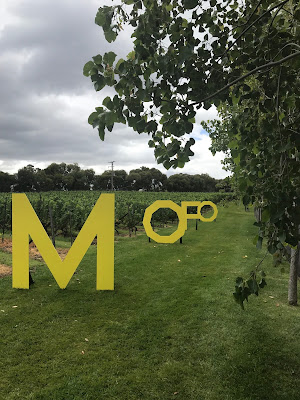 I can't imagine that there's a better feeling than FINALLY doing something you've been vowing to do for years. Ever since MONA opened in Tasmania I've had a desperate hankering to attend. And to top it off, I wanted to visit during MOFO - the summer festival of art and music.

Hubby had his cycling trip to Bright planned, my gal's not interested, so I asked my bestie from Uni. She was IN. It helped that as an academic this was basically a work-related trip for her - made the choice even easier.

Now, when it comes to travelling to MONA, the cry from those who've been there before was loud: travel by ferry and get thee to the Posh Pit. At first, my inner scrooge baulked at the tiny extra cost. But then, in the interest of really experiencing it, we went for it. On the Friday, we wandered down to the Ferry and caught the special MONA ferry.

I heart the posh pit. 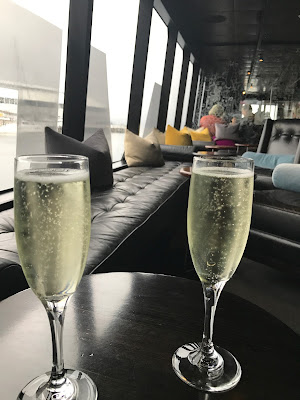 Greeted with a glass of bubbles that attentive, boiler-suit-clad staff insist on regularly topping up (yes, even at 9.30am - what of it?) I was already in love. 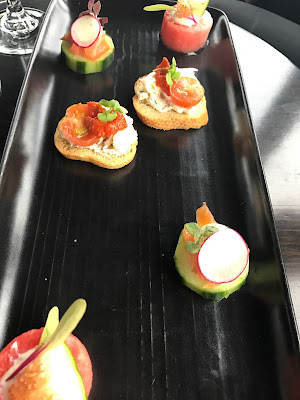 Then check out the canapés on offer.

Arriving at MONA we had timed tix to the free exhibition On the Origin Of Art. Four scientists curated four exhibits that you viewed after choosing a doorway (so much like choosing a window on PlaySchool!).

This was mind-blowing. We spent hours immersed in these rooms. Words can't describe. It was just the best thing I've ever seen that's all. 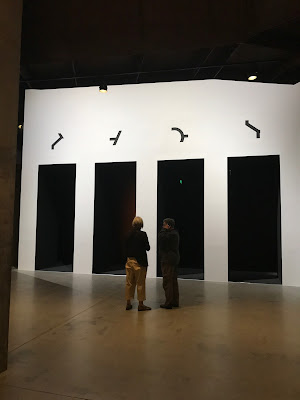 This Leda and the Swan was stunning. Bold, lush, compelling it dominated the room. 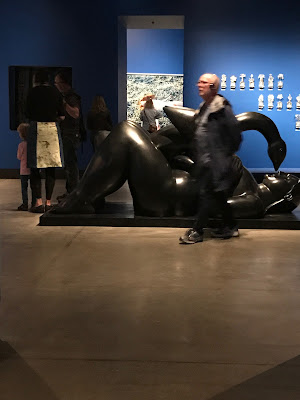 This, check out this. 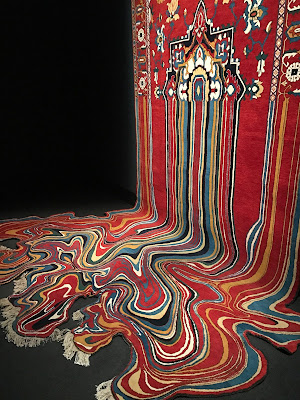 Because it was MOFO, there were musical acts in the most surprising spaces. This gallery was one. Haunting. 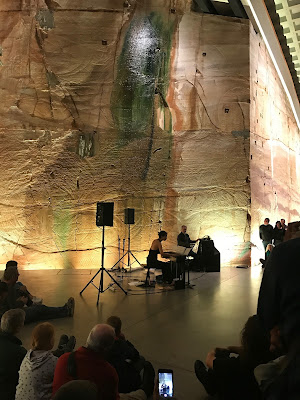 I had to buy the book on the story of MONA - M and I couldn't believe that an architect and David Walsh could have such grandiose vision realised. Look at this incredibly long concrete tunnel that leads to an intensely powerful pavillion. 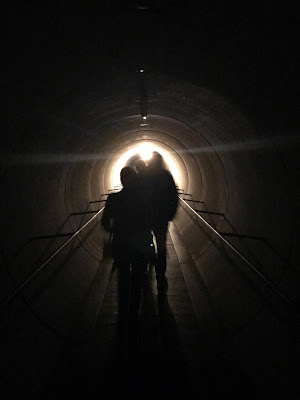 If you're going to ferry people to your museum you SHOULD custom build a multi-million dollar ferry with sheep for seats up the back. How can something be simultaneously ominous and welcoming? How? 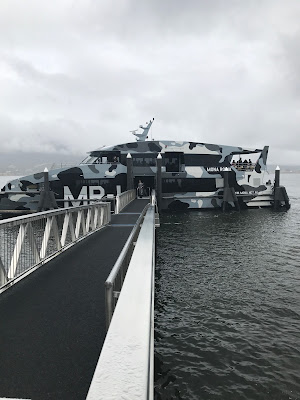 Look, everyone's been drinking whisky for yonks. Except me. I decided Tasmania would be the place to rectify that. And that this bar underground at MONA would be the optimal venue. 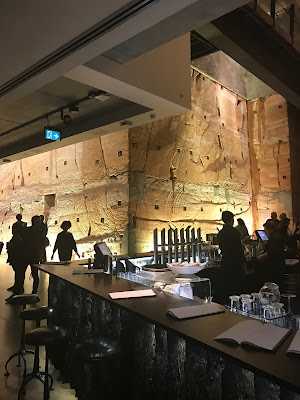 It was. An attentive barman listened to our tastes and selected these babies. Neat. 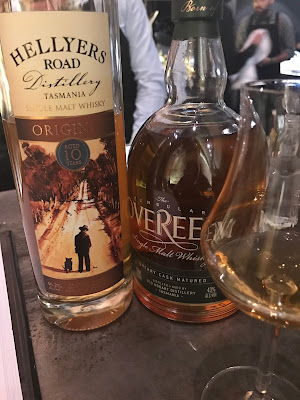 We visited Battery Point, where a lovely woman in a lovely shop told us we must see the dusk light show in the Turrell Pavillion at MONA.

Sitting on warmed marble benches, with the Tasmanian dusk already turning on a show - we were treated to this. Doesn't do it justice - you have to see it. 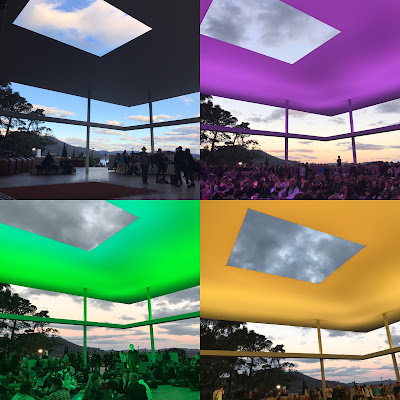 If ever I were to be inspired to take up landscape painting this would be my muse. 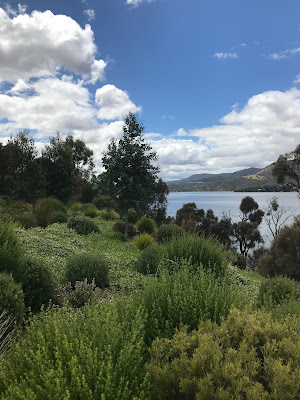 And then, on the final morning, we bid farewell to our heritage sandstone AirBnB, gazed down over West Hobart, and plotted our return. Dark MOFO 2018 - see you soon. 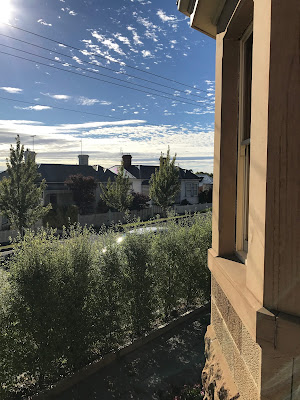 Posted by PinkPatentMaryJanes at 9:00 PM 3 comments: 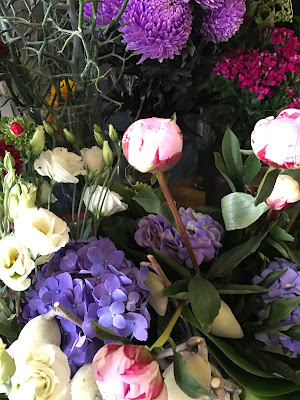 I'm facing this year with optimism and joy. It's a big year in our house - it's our daughter's final year of schooling, so we'll be all hands on deck helping her not just survive, but thrive through year 12. That means a lot of smiles, a lot of support, loads of healthy snacks and meals and whatever it takes to make the year as stress-free and successful as possible.

She's also got a reward to look forward to, Christmas in England with our relatives followed by her birthday and New Year's Eve in New York. If that doesn't inspire her, nothing will!

I'm also looking forward to a new year in my new job. I love it so. I'm surrounded by people in my team who love what they do - and love what I do. It's a joy to go to work every day. Having come out of a very negative and stressful work experience a while back, I won't ever put myself through that again. Life's too short - you've got to do what you love - with people you like.

My motto this year is 'smile first'.

Yours?
Posted by PinkPatentMaryJanes at 11:35 AM 3 comments: