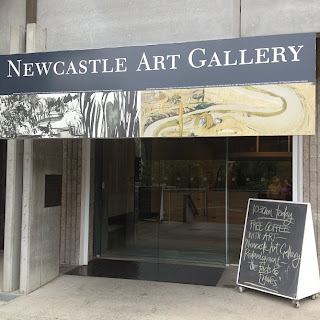 Hi, well, how was that long-long-weekend hey? I appear to have made it a super-long one by not blogging - how rude of me! But I'm back now, and I just thought I'd fill you in on what I've been up to. What I've been up to is being outraged about Newcastle Art Gallery.

Do you have a cuppa? Settle down, it's a bit of a story.

Now, you may have noticed that I'm *quite* the champion of my hometown. I've seen it grow from an industrial town, to a thriving exciting city full of promise. There are people here who make things happen. So many new cafés and restaurants opening that even I can't keep up (and I try, oh my, do I try).

So I've been excited to follow the progress of Newcastle Art Gallery. It was opened in 1977 and has had very little done to it over time. No major upgrades, no increase in storage space to keep up with our $80 million collection, just the bare essentials. Over the years the Foundation and staff have lobbied for an upgrade, for more space, so they can showcase more than 1 - 2% of the collection. So they can host major touring exhibitions and attract more people to the gallery and increase revenue.

Excitingly plans were approved. A DA was granted in March 2012 and things started to roll. The new plans are detailed, not only is there more storage space and exhibition space - but there is the opportunity to raise more revenue through a café and an Art Gallery Store (don't underestimate the money-spinning abilities of these. Think of how many times you've gone to an exhibitions and wanted to take home a little something to remember it by).

So work commenced, plans were drawn up, funding was allocated - Newcastle Council has had $7 million set aside for a number of years, complete with between $1 million to $2.2 million raised by the community (these figures vary, I'm unable to track down an exact figure - but it's at least $1 million raised by the community). The Federal Government committed $7 million to the project and the final piece of the puzzle was for the NSW state government to chip in with $7 million. It's not much, the Art Gallery of NSW has plans at the ready for expansion - at the cost of $400 million.

But now all that work seems to be naught. We have a new Lord Mayor, elected under the premise to "Get the job done". Right from the early days he appears to have had an issue with the Art Gallery redevelopment. At the start of the year he raised an alternative proposal. Rather than redevelop the existing gallery, we should move it to the heritage former Post Office. It's just lying neglected. Brilliant! But Newcastle Council doesn't own the Post Office - it's owned by NSW State Government. And the University of Newcastle have the first option on the Post Office, should they wish.

Oh well, another solution. Let's merge the Art Gallery with the adjoining Library building. That'll give it all the space it needs. Here, I've had an architect draw up some plans.

Um. Great. And the library?

Um, the one we don't own? The one that's been lying vacant for years and will require between $6m and $15m to restore and bring up to standard?

These options rightly didn't fly. So did our Mayor do his civic duty and stick with the current proposal? No, he resigned from the steering committee, before seeing that the project had detailed drawings and was costed to within the $21 million budget and now he's putting a rescission motion before council.

Basically the rescission motion calls for all work to be stopped on the Art Gallery until the council "is in surplus and in a position to proceed". No date. No idea of when, just some time in the future.

Now, apparently the council is in a negative position financially and fiscal restraint must be applied. Fair enough, it's time to look at what can be done. But does it make sense to halt ONE project, one that has already commenced? One that's had money set aside for a number of years, including money from the community, and has raised $1m in interest on these funds? Are other projects, including McCloy's pet project of 'revitalising Hunter Street' also being halted? I can't find the answers to these questions.

This reeks of petty politics and I won't stand for it. Newcastle is sick to death of being treated as undeserving. We deserve this Art Gallery that the staff and supporters have fought so hard for. We deserve the tourism dollars it will bring in, and we deserve the cost savings that a new, energy-efficient building will create.

There is community support too. Have a look at this facebook page which has 293 likes in just over two days. This issue is not about fiscal restraint, this is about pitting us and them. 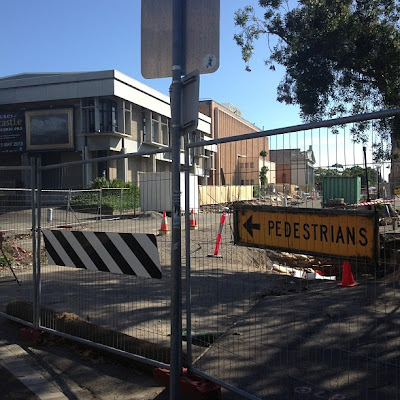 This is how the street outside the Art Gallery has looked for over a year.

Newcastle deserves so much better than this.

If you live in Newcastle, or you are a supporter of the Arts, please let our local councillors know. Here are their email addresses. The councillors behind the motion are Jeff McCloy, Lisa Tierney and Andrea Rufo.

C'mon Newcastle, let's get mad as hell, we're not going to take it anymore.
Posted by PinkPatentMaryJanes at 10:24 AM 3 comments: