Oh Bruges, you're a beauty. This post has been brewing for days, mainly because I just couldn't manage to cull my photos into a small enough batch for a blog post. Bruges was my husband's idea, one of his best. As we were going to be in the Europe over Christmas he thought we'd best try somewhere new, and of course cycling led him to Bruges. 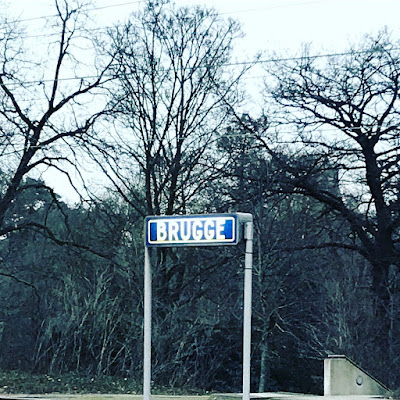 What an absolute stunner of a city. We arrived late at night after taking the fast train from Ebbsfleet in London through to Brussels before switching to the train to Bruges. Along the way I saw so much snow, I got a bit excited about the whole White Christmas scenario - but we didn't need it. 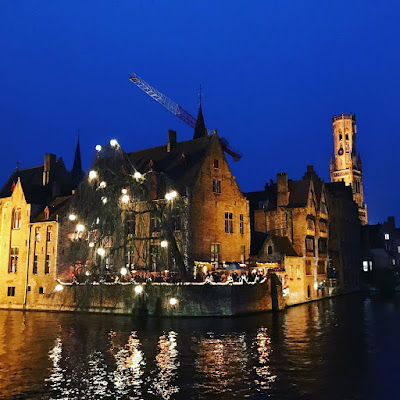 Have you ever seen anything prettier? This was a mere 100 metres from our front door. We rented a house on AirBnB in the old town, and a more perfect position you could not find.

I was worried that the shorter days of a European Winter would limit our sightseeing abilities, but Europe in Winter at night takes on a whole new level of beauty. 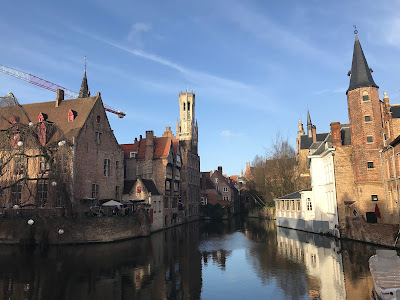 Bruges is likened to Venice and I understand why - there's just something extra special about homes along canals. 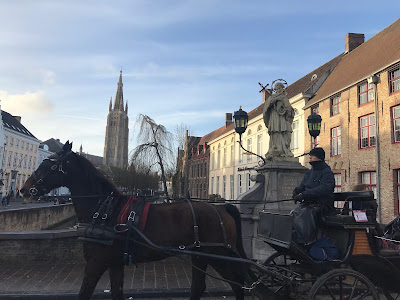 The sound I'll take away from  Bruges is the clip clop of the horse and carriage on cobblestones. [Oh, those cobblestones, so pretty - but jeez, they take it out on you when you do a lot of walking!] 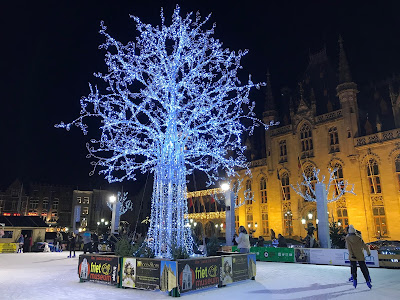 Adding to the whole Winter Wonderland vibe was this ice rink in the centre square. We didn't strap on skates [I value my ankles too highly for that!] but it was just lovely to watch. 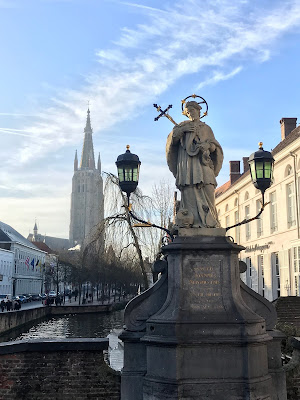 Nowhere did my eyes alight without falling on something just utterly breathtaking. Religious iconography abounds - particularly on every street corner which is decorated with the Mother Mary and child.

The best thing we did was hire a bicycle tour guide dude. Here he is. An historian with thighs of steel, were were pedalled through the streets of Bruges where we heard so many tales about the architecture, history and politics.

Best money I've ever spent. Seeing a city via bicycle is my fave, and I didn't even have to pedal! 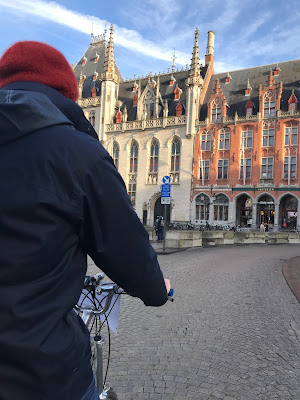 We were blessed with blue skies for pretty much our entire trip ensuring that every iPhone photo looks like a postcard. 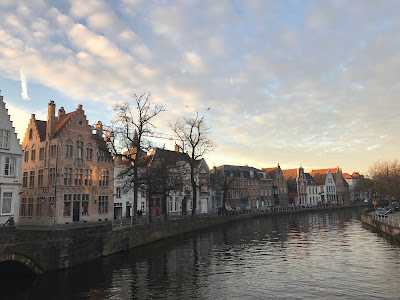 Our gal succumbed to a bit of a cold, so hubby and I toddled off to a restaurant around the corner where we shared this plate for two featuring Belgium's greatest food hits. Rabbit, chicken, pork, beef, veal and mussells - accompanied by frites and mayonnaise, and washed down with a local beer. 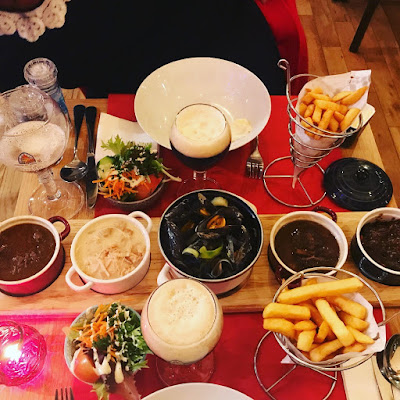 No filters were required, just the spectacular night sky. This looked like some glorious version of the Northern Lights - and had us in awe. 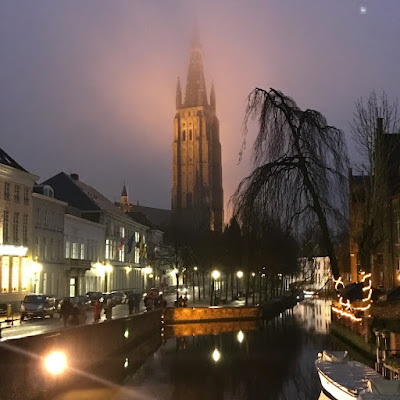 This here is the wee house we stayed in. A beautifully-restored 16th century home. It's got me yearning to paint the floorboards in our house white... 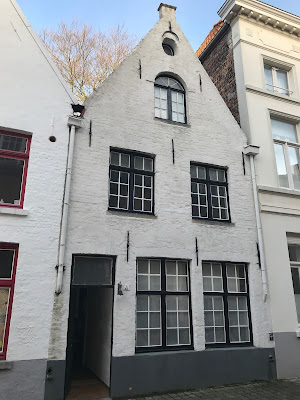 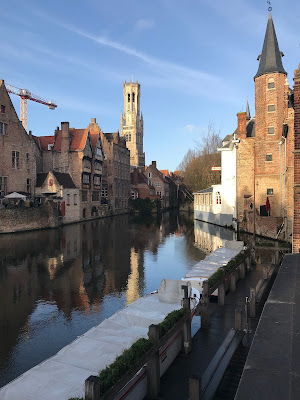 My cape got quite an outing in Bruges. Hubby was very approving as it provided just the pop of colour he needed for his photos. 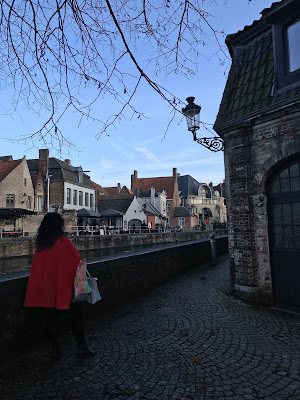 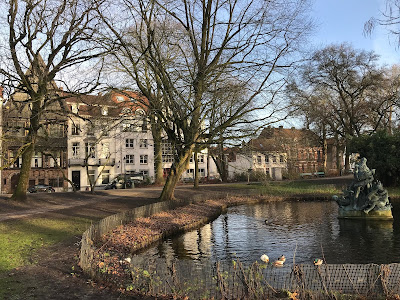 Seeing white swans still freaks me out a little... 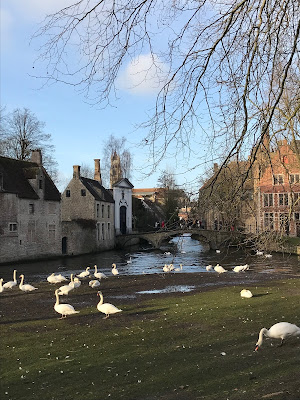 There were so many cyclists in Bruges. I'd estimate 1/3 of the vehicles on the roads were cycles. So safe. There's a mutual respect between cyclists and cars in Bruges, like pretty much all European cities. I pine for that in this country. 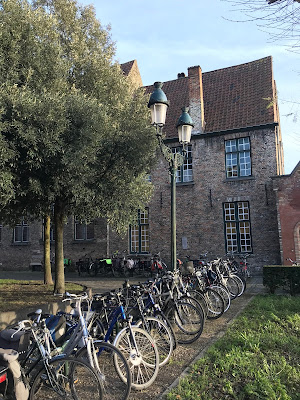 One of the things we didn't get time to do was take a boat ride on the canals. What a shame, we'll have to go back again... 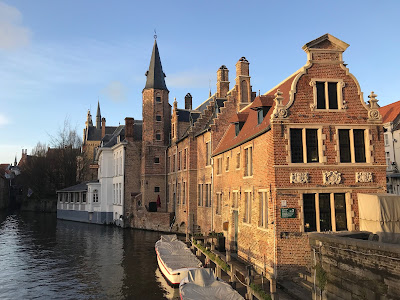 Look at this light. And I love the architecture of bare branches in winter and how they just provide the perfect frame for photos. 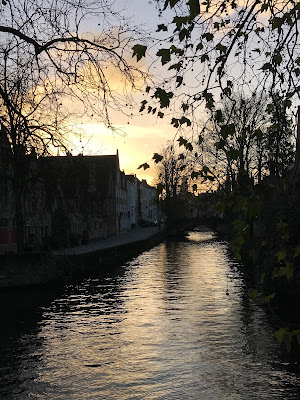 These windmills are still in action - in the warmer months - milling flour. Also: v pretty. 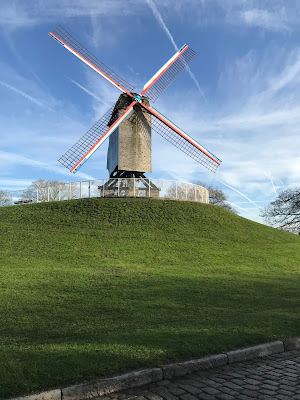 Honestly, my obsession with bare branches and architecture is really only beginning - wait till we get to Paris. 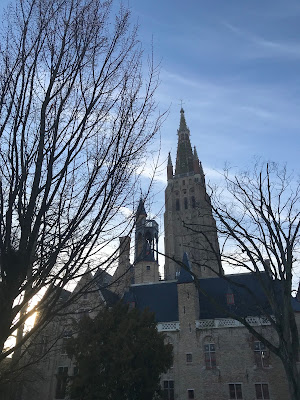 This was our bedroom at the top of the house. So restful.

Now, how do I go about painting our floorboards white? 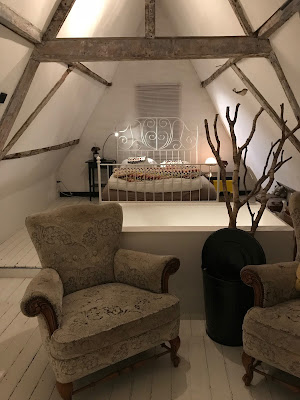