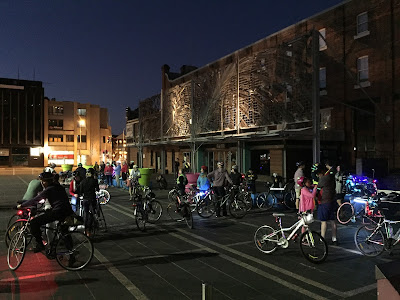 So, last night I had the best night in, like, ever.

It was the very-first Newy Night Ride - where people gathered in Wheeler Place, decked out their bikes (and their helmets - and for some, their bodies!) in solar or battery-powered fairy lights and rode around Newcastle.

77 people came along. The bikes were all in varying shades of fabulous (from fabulous to FABULOUS) and everyone wore a gigantic smile.

My bike was on the understated side.

But my lights were pale blue loveheart lanterns. 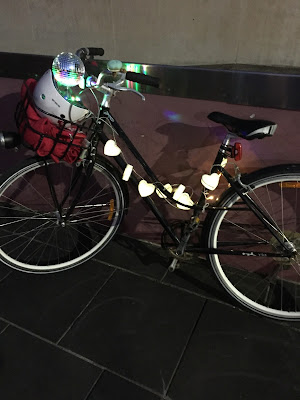 And yes, in case you were worried I was too understated that IS a disco ball in my basket.


We started off a little after 6 as we were waiting for Bernie. I wasn't sure who this was at first (until I found out he was the owner of my fave bike shop - Metro Cycles) and then when I saw him, I knew why we'd waited. 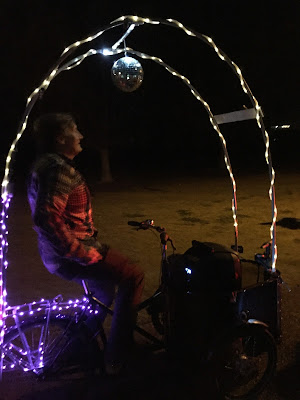 Not only did that disco ball top my disco ball, Bernie had a full-on sound-system in this cargo carrier bike. And he blasted 70s disco for the full ride.

Was I in heaven? Oh yes I was.

We rode around Honeysuckle and over and around Carrington, bringing smiles to people's faces as they glanced up from their dinners. Mobile phones were raised and I'll be there are plenty of videos on Instagram and Facebook saying "I have no idea what this is, but it's fabulous!" 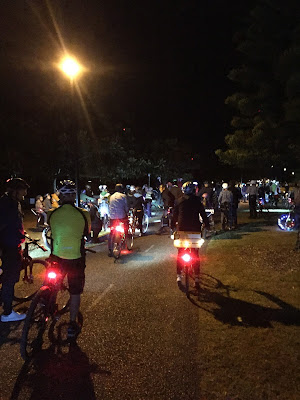 The ride was so well-organised. We had marshals throughout who guided us across roads and waved and smiled at happy cars who would let us through. A highlight was when we filled a sidestreet, and a police car came down the other side of the road, and lit up his car and whooped the sirens in solidarity with us.

The night ended at The Edwards in the new beer garden. I love how these guys embrace fun Newcastle things. It can't have been easy finding parking for 50-odd bikes in the new space!

So many people say to me "I don't know how you do it" when I say what I've done on the weekend - but I feel it's so important to make an effort to support new and fabulous things. I was so tired yesterday that I just wanted to flop on the couch, and then, when my solar lanterns didn't charge, it could've been easy to give up. But no, I nicked my daughter's loveheart lights from her bedroom wall (with her permission!) and went along on a night that will bring me joy whenever I recall it.

Thanks Tom and Gus and all the team for organising this. And thanks to the Sydney Night Ride peeps who came up to share in this event. Legends all.