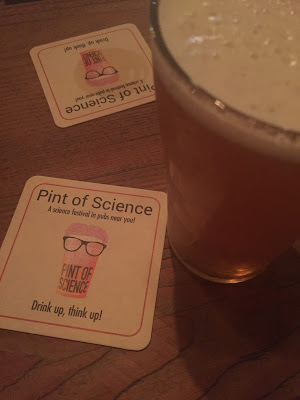 I get to do the most fun things.

For example, over the past few months I've been working a group of young scientists on this! Bringing science to the pub in Newcastle. Well, The Edwards to be exact.

Pint of Science is an international event that came to Australia and now we've brought it to Newcastle. And, in very chuff-worthy-news - we were the first team to sell out (every single night!)

Yep, three nights of science with a sold out crowd. 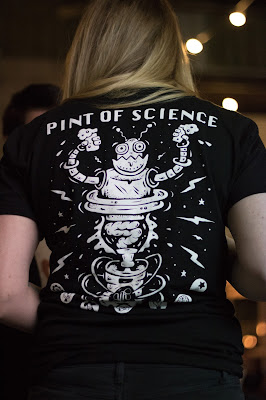 Here is the very fabulous Chloe modelling the super-awesome shirt that we all received thanks to national sponsor Young Henrys (a damned fine beer).

Emma is one of my favourite scientists, and here's why - she made a roomful of 50 people stick a tasting stick on their tongue and poke it out. See, these sticks let you know if you're a 'taster' or a 'non-taster'. For some, the strips just tasted like paper - for others - they were a little tasty - for others, it was like they'd sucked on a whole bag of lemons.

Apparently I'm a non-taster. Non-tasters tend to eat more and be less fussy than tasters. That explains A LOT.

Over three nights we gathered together the most incredible array of MCs, speakers and audience. Here's our night two: Down To Earth crowd. We learned about the ocean, clouds and coasts on this night - it was bloody brilliant!

There are so many things I'm proud of.

One: we brought science to a whole new crowd and they loved it! We had people begging us to put on more events (and we will - next year!) and people turning up on the door hoping to be let in to a sold-out event.

Two: three nights went off without a hitch - diverse speakers, entertaining MCs and an enthralled audience in a very cool venue.

Three: gender equity baby. A team of five women brought together 3 women MCs (one man) and four women speakers (three men). This was coincidental - we just chose the best people for the job - and we happen to have awesome women in Newcastle. The only night we were conscious of balance was the final night when we had two male speakers so we had two women MCs balancing it out.

This is what a group of very happy women look like after pulling off something that we'd only dreamed of. The very fabulous Chloe had the idea to bring this to Newy, and thanks to her organisational skills (and the brilliant National Organiser Mayan) we did it.

Bring on next year.

And thanks Emma for the blog title inspiration.
Posted by PinkPatentMaryJanes at 11:38 AM 2 comments: