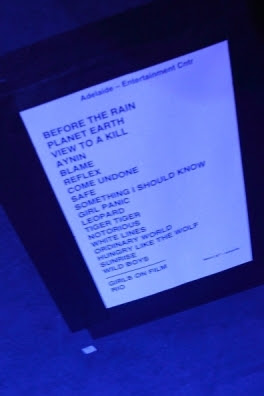 I was completely blown away by Duran Duran on Wednesday night. Completely and utterly blown away. See this set list? See that second song? Yes, that would be Planet Earth which quite nearly blew the roof off the Sydney Entertainment Centre.

Damn. They were good. 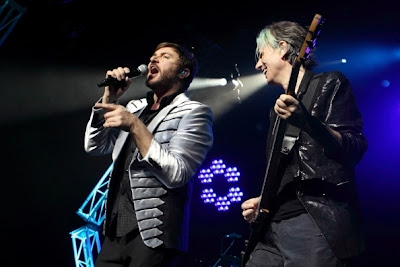 And they had fun. Simon pulled out his best rock god impressions, and damn, did he do it well. And see that smile on John's face? It barely left. You've got to be happy when a band seems glad to be there. They played non-stop, every hit I've ever hoped to hear. There was also real, genuine banter with the crowd. Nick took shots of the crowd and updated his Facebook page within moments of leaving the stage, and Roger shows that some drummers can age beautifully. My fave moment was John's heartfelt tribute to Molly Meldrum, the man they credit with introducing them to Australia.

Duran Duran opened the Sydney Entertainment 30 years ago - a concert I was overjoyed to attend as a teen, so watching them surpass that performance three decades later was kind of surreal. This time around we weren't in the nosebleed seats, but were in row 7 - yes SEVEN. So close we could almost touch them {which my friend Anne managed to do bless her socks. Pretty sure she's never washing her "Simon-hand" ever again}

We danced the night away, astonished that a band of this vintage could rock out better than bands a quarter of their age. They worked that stage and worked the crowd perfectly.

After a fab finale involving Girls on Film John Taylor thanked the crowd and said whenever Sydney wanted them, they'd be back to play.

Now, if you'll excuse me, I'm off to denude iTunes of all its Duran Duran. I've got me some catching up to do.

Please come back. And soon. I'm a Duranie again - and not ashamed to admit it.

Okay, if you're in NSW you MUST go to Lasttix. A reserve tickets for tomorrow night's show are 50% off. Go. Seriously. GO! I would SO be there but I have a much-looked-forward-to 40th tomorrow night.
Posted by PinkPatentMaryJanes at 5:07 PM 6 comments: